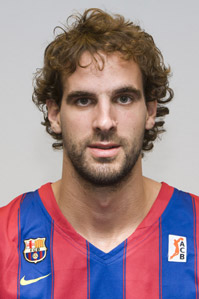 Roger Grimau signed for Barēa in the summer of 2003 on the back of his star performances for Caprabo Lleida.

His versatility as a pointguard or Guard recommended him to the team that had just become European champion.

Roger is the middle of three brothers, all of them professional basketball players and although he was the last to join Barēa he is the only one still with the Club. He came up through the youth teams of JAC Sants, CB Hospitalet and Grup Barna, and established himself with Sant Josep de Badalona, at that time linked with Club Joventut.

1998/99 season
After two seasons, in one of which he was the category’s top scorer, he played 25 games in 1998/99 for the first team, Joventut Pintures Bruguer de Badalona. That year he won the first title of his career, the Catalan League. He scored a total of 68 points and averaged 3 points per game in the ACB. Despite being only 20, he wanted a bigger challenge and in 1999/00 signed for Caprabo Lleida.

2001/02 season
In their first season in the ACB both Grimau and the team performed well above expectations. Far from languishing in the bottom zone, Caprabo Lleida classified for the playoffs, losing in the quarterfinals to FC Barcelona. Grimau averaged 14.4 points in the 34 games of the regular phase and more than 10 in the four games of the playoffs. Lleida qualified for Europe (ULEB Cup) for the first time in the club’s history. Roger and Caprabo Lleida were the surprise packages of the season.

2002/03 season
2002/03 was Grimau’s last season in Lleida. He led the team to the Catalan League trophy at the beginning of the season and was voted MVP. That year he averaged 14.3 points per game and increased his percentage of 2-point shots to 55%. His performances attracted admirers from around the ACB and he finally joined FC Barcelona.

2003/04 season
In his first season with Barēa, Roger Grimau won the league title despite missing half the season due to a serious foot injury. He played 28 games, averaging 8.5 points and 3.6 rebounds. He made his Euroleague debut and played nine games, averaging 6.7 points and 2.1 rebounds but the team failed to repeat their title success of the previous season.

2004/05 season
In 2004/05, Grimau helped to win the Catalan League, beating former club Caprabo Lleida in the final and getting revenge for the previous season. With the rest of his Barēa teammates he won the newly established ACB Super Cup. Grimau averaged 4.8 points in the regular season (but the team was eliminated in the playoffs by Estudiantes), and 5.2 in the Euroleague, where FC Barcelona were eliminated in the quarterfinals. Grimau headed the ranking in 2-point shots and buried 20 shots from 28 in the eleven games of the regular season.

2005/06 season
He began the 2005/06 season late due to an elbow injury he picked up in the semi-final of the Catalan League against Manresa. On recovering, Grimau played 32 games, averaged 3.8 points and maintained his percentage in 2-point shots (55%). In the Euroleague he played in 18 games and averaged 4.2 points. Barēa reached the Final Four but were eliminated in the semi-final by CSKA.

2006/07 season
In the following season, Grimau averaged 13 minutes in the regular phase, nearly 5 points and captured 2 rebounds per game while in the Euroleague he played an average of 12.4 minutes, scoring 4.2 points, capturing 2 rebounds and giving 1 assist.

2007/08 season
With the departure of Juan Carlos Navarro to the NBA, Roger took on a more prominent role. Appointed team captain, he played more minutes and improved his stats. In the ACB he averaged 20 minutes per game in the regular phase, 10.2 points, 3 rebounds and almost 2 assists, with a valuation of 9.5 points. He also enjoyed more time on court in the Euro league: 21 minutes, 10 points, 3.6 rebounds, 1.7 assists and a valuation of 10.

2008/09 season
He achieved his dream of lifting the ACB title as captain. He came off the bench in the nine games of the playoffs and helped swing the balance in Barēa’s favour. He achieved percentages of 52% (2-point shots) and 38% (3-point shots) in line with his stats in the regular phase but made an even bigger contribution as playmaker.

In the Euroleague, the team also benefited from Grimau’s efficiency and work rate. He averaged 6.3 points, 2.4 rebounds but failed to reach the final despite participating in the Berlin Final Four. Taking third place was some consolation, especially as Barēa had never won the game for third/fourth place.

2009/10 Season
Four out of five titles on offer. The 2009/10 season will be remembered by Roger Grimau for the Catalan League, ACB Super Cup, Spanish Cup and Euroleague trophies he collected. It was a disappointment though, not to pick up the ACB League title, particularly given the way the season as a whole went.

On an individual level, Grimau will be less than fully satisfied with his numbers. Although he was always present, his ACB average was just five points and two rebounds per game. His best game came against DKV Joventut in Badalona, when he received a 17 point valuation (13 points in 14 minutes played). His stats in the Euroleague were similar - 4,9 points and 2,1 rebounds. He set a personal record with three offensive rebounds against ASVEL in the first phase of the Euroleague and also put in two blocks against Panathinaikos in the Top 16 (another personal record) in a game where he was MVP and the team’s maximum points (24 valuation and 17 points).

National Team
He is an international for Spain. Perhaps his finest moment was with Spain B when he won the gold medal in the 2001 Mediterranean Games in Tunisia. He also won the silver medal with the senior Spain squad in the European championship in Sweden 2003.

He was born into a basketball family (his father played for Barēa) and his brothers Sergi and Jordi are also professional players who learned their trade with FC Barcelona. The eldest brother, Sergi, competes at national level while the youngest, Jordi, has played for Suzuki Manresa for the past three seasons.

CHARACTERISTICS
An explosive guard, both defensively and in attacking transitions. Basket penetrations are one of his strong points as is long-distance shooting. Likes running and fast play.