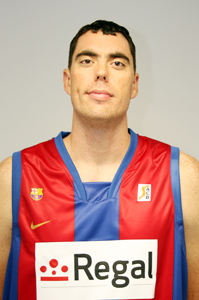 Daniel Gregg Santiago Miller is the centre the head of basketball was looking to find for Barça. His 216 cm height and 120 kg weight make him the prototype player the club needed once it was known that Mario Kasun was on the way out.

The Puerto Rican (Lubbock, Texas, June 24, 1976) comes to Regal Barça after a three-year spell at Unicaja Malaga. In Andalusia, Santiago played in 100 ACB games, posting excellent averages of 9.7 points, 3.7 rebounds and 0.8 blocks a game. In the Martín Carpena pavilion he collected the Liga ACB 2005/06 and was named MVP of the 21st round of the 2007/08 season.
But if there has been anything that Santiago has always on his mind, then it’s the NBA. He played college hoops at the University of New Mexico, and his desire was to move on the top professional league in the country, but wasn’t signed up by any NBA franchise until 2000, when he joined the Phoenix Suns. But before that he had the experience of two seasons in Italy, where he was at Varesse (1998-2000). Shortly after, in the 2003/04 and 2004/05 seasons he played for the Milwaukee Bucks, though in his second season he only appeared in 11 games due to an eye injury.

Corpulent and intimidating player of a height of 216 cm, making him a pure centre who can create a lot of danger on the paint. Despite his 120 Kg he moves with agility under the hoops and has a strong medium distance shot.