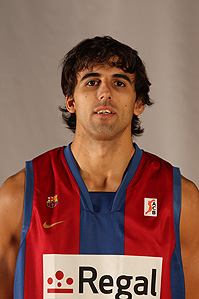 To speak of VĒctor Sada is to speak of somebody who has lived basketball intensely all his life. The son and brother of players, the sport is synonymous with his life and family ¢ his father Adolfo Sada made a name for himself with FC Barcelona.

There is Barńa blood in the veins of this 25 year old, which is only to be expected after he spent a whole decade wearing the colours (1995-96 a 2005-06). He made his first debut aged 19 years, but in that great side he failed to win a regular slot in the team.

Svetislav Pesic gave him his first chance in basketball, and it was with that coach that he raised to prominence. Sada has always been thankful for what the Serbian coach did for him, for it was under him that he learned how to cope with professional hoops.

On June 19, 2006 VĒctor Sada terminated his contract with FC Barcelona. After four years on the Akasvayu Girona roster he has developed into one of the biggest names in the ACB, and Sada returns to the club ready to form an important part of a basketball project commanded by Joan Creus in the offices and Xavier Pascual on the bench.

Sada has grown on the ACB market and is now one of the most dependable players around. At Girona he also did his bit for the club’s first ever major success on the European stage for this proud Catalan club: they won the FIBA EuroCup. He was freed from the pressure of a big-name club like FC Barcelona, and his statistics reflected that. In two seasons at Akasvayu Girona, VĒctor Sada played a total of 67 regular season and 7 play-off games..

Victor Sada is an eminently defensive player, although his vision of play has improved considerably in recent seasons and he is now a regular provider of assists. But it is defending where he shines, and he is one of the best stealers in the Spanish game. In the last two seasons at CB Girona, Sada has made more than one steal a game.