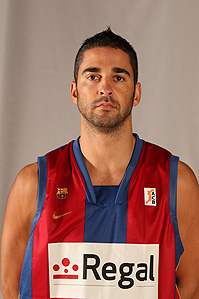 After a season in the NBA, Juan Carlos Navarro is rejoining FC Barcelona for the 2008/09 season, the club where he learnt his basketball and where he is a key player.

Juan Carlos Navarro is a product of the FC Barcelona academy. He started out at CB Santfeliuenc before signing for the Barša under-12s. Steady progress saw him join the under-18s in the 1996/97 season. The following season he alternated between the under-18s and the side in the EBA League along with the odd appearance for the first team. Aged 17 he made his ACB League debut on 23 November 1997, under Joan Montes. In just 10 minutes he scored 10 points.

For another season he combined Barša B in the EBA League and the first team. Finally in the 1999/00 season he switched to the first team under AÝto GarcÝa Reneses. Season after season Navarro became more and more important in the side to become one of its leaders in spite of his youth.

When Svetislav Pesic arrived (2002/03), Juan Carlos and his team-mates stepped up a gear to win the treble including the Euroleague won at the Palau Sant Jordi.
But it was really the 2003/04 season when he settled in the team and became a decisive player in the Serb’s system.

His averages improved in all respects over the previous season and he shot his best ACB score with 30 points against Real Madrid on 28 December.

Though in the NBA draft in the 2001/02 season (chosen in the second round with number 40 by Washington), and in spite of his great friend Pau Gasol leaving for Memphis, Juan Carlos preferred to make a name for himself in Europe and be the leader of his team before going to America.

The 2007/08 season was when Navarro found the ideal time to go to the NBA. Juan Carlos signed for the Memphis Grizzlies and helped by Pau Gasol, the ‘Bomba’ burst into the world’s best League. He made his debut against the San Antonio Spurs, scoring 9 points in 17 minutes. In 2008 he played in the rookies match at the All Star Game in New Orleans. He was also in the second ideal rookie five for 2007/08, chosen by NBA coaches. In the US he averaged 10.9 points in 25.8 minutes.

A Spanish international, Juan Carlos Navarro made his debut on 18 August 2000 when he scored two points against Lithuania. Since then he has become a fixture in the national team, playing in the Athens Olympics in 2004 and at Sydney in 2000; the European Championships in Sweden 2003, Turkey 2001 and Spain 2007; the World Junior Championship at Lisbon 1999, and the European Junior Championship at Varna 1998. He is part of the Golden Juniors Generation with fellow Spain players such as Pau Gasol, Ra˙l Lˇpez and Felipe Reyes, who beat the US in the Lisbon World Junior Championship. He was the MVP at that tournament.

Extremely talented offensive player who impresses fans with his remarkable scoring prowess. His rapid three-pointer shots and speed on approaching the hoop have brought him the nickname the Bomba, given to him by coach AgustÝ Cuesta when he managed the junior side.

One of Juan Carlos Navarro’s main virtues is his ability to decide when, how, where and with who he wants to play at any given time. This, combined with great technical skills and rapid execution, has made him into one of Europe’s top players.