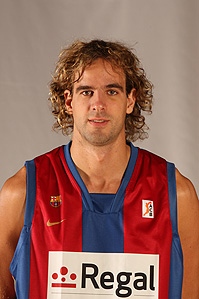 Roger Grimau came up through the youth ranks of JAC Sants, CB Hospitalet, Grup Barna and Sant Josep Badalona, where he spent two seasons (1996-97 and 97-98) in the EBA league.

The following season he moved up to the ACB league with Joventut Pinturas Bruguer, staying one season but failing to hold down a regular place.

He signed for Caprabo Lleida in 1999 and stayed for four seasons until joining FC Barcelona in summer 2003. With Caprabo Lleida he played two seasons in the LEB league and two in the ACB, winning promotion in 2000-01, and was the star player of a modest team that performed way beyond expectations. Roger took his team into European competition for the first time and led them to their first and only title: the Catalan League in 2002-03.

His performances brought him to the attention of Svetislav Pesic, who saw Roger as an ideal squad player. However, a serious foot injury almost prevented him from contributing to his first ACB league title but, fortunately, he recovered in time to share the triumph against Estudiantes in the final in the Palau Blaugrana in 2004.

Roger Grimau is a full Spanish international and took part in the European Championship in Sweden in 2003 and the Mediterranean Games in Tunis in 2001.

An explosive guard, both defensively and in attacking transitions. Basket penetrations are one of his strong points as is long-distance shooting. Likes running and fast play.