The supporters clubs of L’Urpa and Collsuspina both unveiled their club crests of arms on the wall of the Gol Nord at the stadium. 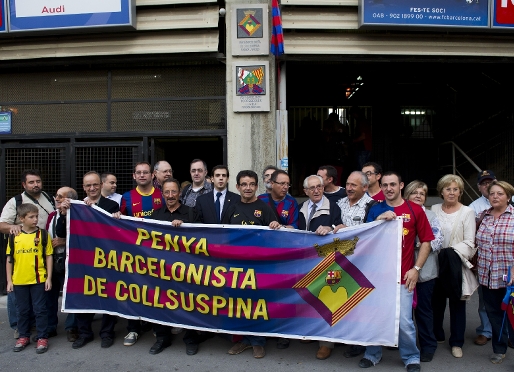 Photos: FCB-Alex Caparrós
The Penya L’Urpa in Barcelona and the Penya Barcelonista Collsuspina from Osona both had their club crests unveiled at the stadium last Saturday.

The Director of the Comissió de Penyes, Daniel Casanovas did the honours at the unveiling of the Penya Barcelonista Collsuspina crest, together with its president Josep Petitbo, which was held at gate 105 of the stadium. Amongst 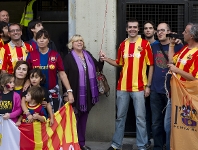 the 20 or so assistants at the event was the delegate to the Consell Consultiu de Penyes for Osona and Ripollčs, Francesc Xavier Canudas.

The Penya Barcelonista l’Urpa unveiled their plaque at gate 104 with Comissió de Penyes director Elvira Pou accompanying the club president Jaume Capdevila in front of about 25 people, including the delegate to the Consell Consultiu for Barcelona Occidental, Salvador Balsells, the delegate for Anoia Penedčs and Garraf, Jordi Abellán. The penya was previously based in de Santa Margarida de Montbui, before moving to its current home in Sants in Barcelona.

The great day was rounded off perfectly with another impressive win for the team at the Camp Nou.