The supporters club has celebrated its silver anniversary in the presence of the vice president Jordi Cardoner i Casaus. 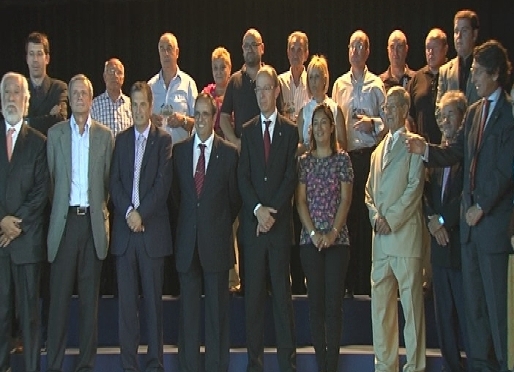 On Wednesday, October 12, the Penya de l’Hospitalet de l’Infant was celebrating 25 years of existence. And they weren’t celebrating alone.

“25 years are easy to take in but they are still a lot and they signify 25 years of effort. A supporters club that means a lot to me personally because it was my grandfather who inaugurated it”, said vice president Jordi Cardoner i Casaus to Barça TV and www.fcbarcelona.cat

The vice president, who led the Barcelona representation, attended the celebrations in this town in the province of Tarragona, accompanied by other members of the Barça family, such as the patron of the Foundation, Josep Maldonado, the director of the Supporters Clubs Commission, Jordi Dura, and former players Josep Seguer and Pere Valentí Mora. This important event was also attended by Xavier O’Callaghan, manager of the handball, roller hockey and futsal sections at FC Barcelona.

For O’Callaghan, being invited gave him an excellent chance to get closer to the supporters movement: “For the club from Hospitalet de l’Infant this is an important day because 25 years is a very long time to have been around. This is a very special moment to remember everything that has been achieved and it is a privilege for me to be here”, said the former Barça handball star.

The anniversary celebrations went ahead perfectly. The president, Francesc Candela explained that the last 25 years had not always been easy: “They have been 25 years of suffering and pride at the same time. But over the last few years, seeing how Barça have played, it has been more about pride than suffering … all of the members are proud to be Barça fans and to form part of this supporters club. It is something we carry within us. It’s a sentiment that can’t be taken away”.

The Hospitalet de l’Infant council, through its mayor, Alfons García and many of the other guests attending the event welcomed the Barça representatives and supporters at Plaça de la Vila before they were transferred to the sports pavilion where the main event was held.