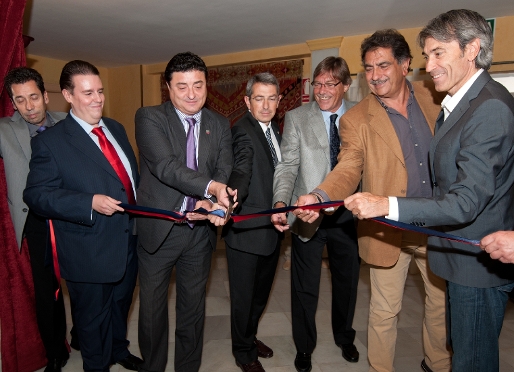 Shortly before seven in the evening, Pau Vilanova, chief director of the Social Commission, arrived at Hotel Rķo in Badajoz, accompanied by former player and advisor to the presidency Migueli, and former basketball star Manolo Flores. They were received by the president of the Gran Peńa de Badajoz and the delegate for Extremadura to the Advisory Council, Santiago Duran, Miguel Įngel Rodrķguez, Governor for Sports of Badajoz City Council, and Antonio Pedrera, Director General of Sports for the Junta, among others. 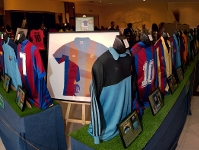 They inaugurated a retrospective exhibition devoted to FC Barcelona, which includes 30 shirts signed by different players from different periods belonging to the Jose Luis Vela collection. Last year’s Liga and Champions League trophies were on display, as well as the recently conquered Spanish Supercup.

The next event was a debate involving the presence of former player Francisco José Carrasco, which discussed the issue of what it takes to build a team as successful as Barēa in today’s environment.

At night, Pau Vilanova was guest of honour in the name of FC Barcelona at a supper to celebrate the 2011 Meeting of Extremadura FC Barcelona Supporters Clubs. More than 40 clubs from the area were in attendance. 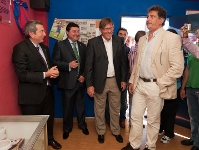 On Sunday the authorities were welcomed to the clubhouse of the Gran Peńa de Badajoz del FC Barcelona. A commemorative plaque was unveiled to mark the opening of the new venue.

Before the gala dinner, Pau Vilanova held a meeting with representatives of more than 60 supporters clubs. He revealed details of future projects involving the supporters movement, and the clubs were able to voice any doubts or concerns.

Once the meeting was over, the traditional gala dinner marked the closure of a wonderful weekend at the 2011 Meeting of Extremadura FC Barcelona Supporters Clubs.