On Tuesday, The Barça President received the representatives of the supporters club that last year celebrated its 50th anniversary. 65 members shared the event with Rosell in the Sala Roma. 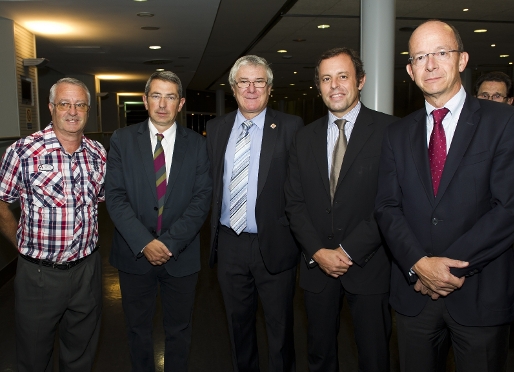 Sandro Rosell, the vice president of the Social Area, Jordi Cardoner i Casaus, and chief executive of the Social Commission, Pau Vilanova welcomed members of the Santa Coloma Barça Supporters Club, on the occasion of their 50th anniversary.
The actual event took place on 20th June 2010. The current board had not yet taken possession of their functions, although they had been elected, but they assumed the commitment to celebrate the event. Thus, the Club wanted to congratulate them on the effort involved in maintaining a supporters club.
Rosell, Cardoner, and Vilanova celebrated this anniversary in the Sala Roma at the stadium. "Very few associations and institutions reach 50. We always say at the Club that what we most appreciate is the celebration of 50 years, 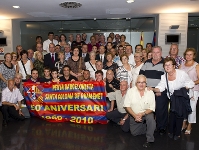 such as badges, with the supporters clubs ... 50 years of commitment to Barça has a lot of merit "said the Barcelona President.

The effort to keep things going

Rosell highlighted the courage of the founders of the supporters club on 2nd January 1960, but also those who have enabled it to keep going: "You’ve kept alive the dreams of the founders of the supporters club".
The President emphasised that the Camp Nou is the home of all Barça fans and obviously also the supporters from Santa Coloma: "Welcome home. Here we are. Whenever we go to supporters clubs or they come here, it’s all great, because you are a very important part of our family".
Jordi Cardoner, vice president of the Social Area, stressed that it was a small, but very special, event that took place on Tuesday in the Sala Roma: "We’re talking about a really nice ceremony in the Sala Roma that recalled the Champions League we won in 2009. It’s worth remembering that 50 years ago it was very difficult to found a supporters club in those difficult times. Acts of tribute like this are very important" he recalled.

Satisfaction with the supporters club

The president of the Santa Coloma Barça Supporters Club, one of the three that can be found in the area, Antonio Blanco, was really excited. "For us it’s very special that we have been welcomed by the Club, and it was done in the stadium: We are really pleased".