On Sunday 19, Guardiola de BerguedÓ hosted the XVIII Meeting of Supporters Clubs of Bages, BerguedÓ and La Cerdanya and the XX anniversary of the Penya Blau-grana Guardiola.

With the representation of more than twenty supporters clubs and attended on behalf of the Club by director Patrick Auset, Social Commission director Pere JanÚ and ex-player Julio Alberto Moreno, the Penya Blau-grana Guardiola celebrated its XX anniversary and the XVIII Meeting of Supporters Clubs of Bages, BerguedÓ and La Cerdanya.
The day began with a breakfast of local ‘coca’ cake and chocolate, followed by a mass. Around noon, Montserrat Ribera, the local Mayoress and her deputy Josep Lara, welcomed the Barþa entourage to the events room in the Town Hall where each of the supporters clubs were presented with gifts and the Club and Council also exchanged items.
The people attending also included Ramon Burniol, delegate to the Advisory Council for the supporters clubs in Bages, BerguedÓ i La Cerdanya, senator Josep Maldonado, ex-players Antoni Camps and Rafa ZuvirÝa, and the organiser of the meeting, Frederic Ferrer, who is also president of the host club.

Sunday was luckily a beautiful day and balconies around the town were adorned with the Barþa colours as Guardiola enjoyed a parade led by a troupe of majorettes. As they toured BerguedÓ, they also unveiled a commemorative monument of the anniversary and meeting, and visited the traditional mushroom market.
The fellowship dinner was held at Restaurant El Blat and was enjoyed by some 130 people, and the meal was accompanied by a performance by the Duet Calipso.
The dinner also involved testimonials to the club’s two former presidents and the Avi del Barþa (Barþa grandfather) Joan Casals. 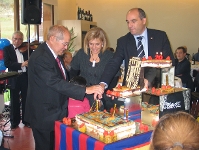 As the speeches continued, Patrick Auset spoke about what the club has achieved in the last five years, and encouraged everyone to continue along similar lines.
The event closed with a further exchange of gifts between the Club and the ‘Penya’. 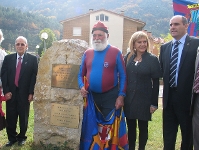 Joan Casals, better known as the Avi del Barþa (Barþa grandfather) has been a member of this supporters club since it started and has been attending supporters club events and matches at the Camp Nou dressed in his peculiar fashion.
He is often remembered for 1992, when the Club won its first European Cup, when he promised he would shave off his beard if the trophy was brought home a second time. Fourteen years later, when Barþa won the trophy again in Paris, he kept his promise.