Saturday, October 4 was the first day of the events commemorating the Golden Anniversary of the Penya Barcelonista de Poblenou. The main event will take place on Sunday, November 16 with a big party at the Casino de l’Aliança.

“The old ones have died, the young ones have grown old, and the youngest ones are living a very different life; but they are all still with us, and that’s not easy… All of a sudden, everything has changed in an almost frightening way”. These were the words chosen by the Board of Directors of the Penya Barcelonista de Poblenou to express their yearning for other times in their commemorative magazine.

For over half a century they have overcome many difficulties, but there have also been plenty of days filled with glory and joy as they have followed Barça around the world. And this year they have more reason than ever to enjoy such celebrations.

The Penya Barcelonista de Poblenou began its Golden Anniversary celebrations by holding a party for the district on October 4. More than 400 people enjoyed a day of bonding between the supporters club and the people of Poblenou. 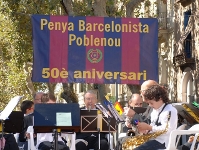 Later on a concert was given by local band Taxi de Barcelona, which was extremely well attended.

The main event forming part of these 50th Anniversary celebrations will be held on November 16 at the Casino de l’Aliança in Poblenou, which is expected to be a huge celebration of Barça.

The Penya Barcelonista del Poblenou was founded on December 5, 1958. A group of Barça fans in the neighbourhood, inspired by Barça’s recent successes, which included the construction of the Camp Nou in 1957, and wins in the Spanish Cup and Fairs Cup in 1958 and the League title in 1958/59, were moved to create a supporters club in their district.

Some of the most important events in the club’s history include a blessing of the club flag at Montserrat in 1959, the tribute to Segarra in 1964, the commemoration of the 25th Anniversary in 1983 and the 2nd itinerant meeting of the Board of Directors presided by Joan Laporta in 2003. 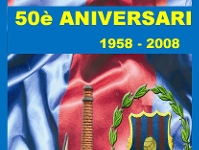 7 presidents in half a century

The Penya Barcelonista Poblenou has had seven presidents over the course of its history. The current incumbent is Pasqual Aixandri, while his predecessors have been: