The Polish fans were lucky enough to get to see Barēa’s best game under Pep Guardiola live. However, this was only fair reward for the enormous effort the Fan Club Barēa Polska had made to come from so far away to support the team.

Barcelona board member Xavier Bagués welcomed three members of the board of the Fan Club Barēa Polska before the game. Bagués thanked to the president Tomasz Lasota and vicepresidents, Bartosz Niewiadowski and Pawel Kolodziejski for coming and praised the work in Poland to further the cause of Barēa. After the speeches gifts were exchanged.

The Fan Club Barēa Polska was officially set up two years ago. Since then it has made a number of visits to Barcelona and has also supported the team away from home, as it did in the Champions League qualifying game in Krakow last August. 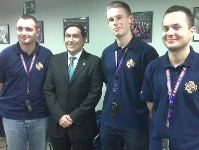