Every day Barça’s popularity is growing around the world which was proven in Donetsk during the visit this week when the Catalan club’s president, Joan Laporta, was met by 20 supporters from Saint Petersburg.

The FC Barcelona delegation was met in the Ukraine by a group of fans that had travelled over 1,000 kilometres from Russia and Laporta was keen to meet them and have a chat to promote the club’s ties in both Russia and Ukraine.

Barcelonismo continues to show that it has no boundaries and proves that it is more than a club around the globe. The attractive football produced by the team, the incredible history of the club and the positioning of the club as a global beacon of solidarity has won so many fans that there are no over 100 supporters’ clubs in five continents.

Another clear example of how Barça’s popularity is high in the eastern Europe is the Fan Club Barça Polska. This supporters’ club was founded just two seasons ago and on Saturday a large of number of members will be in Camp Nou for the game against Atlético de Madrid. 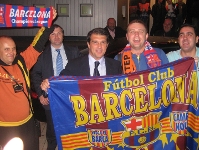