Barça could only take a point from their visit to Les Casernes de Vilanova. A card for Pablo Álvarez at the end of the game meant they had to play out two of the last three minutes a man down and that foiled their hopes of the win. 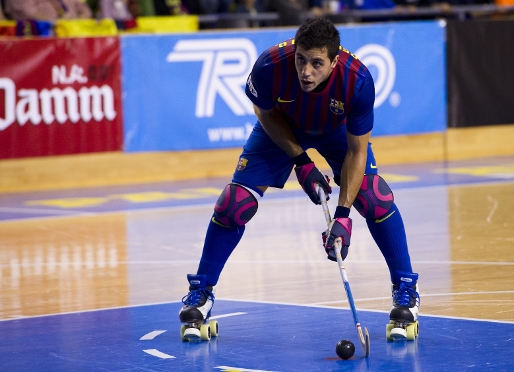 Referees: Sandoval and Martínez
The card for Pablo Álvarez left Barça with just three outfield players, but fortunately the hosts were unable to take advantage, with Sergi Fernández again putting in a fine display. Luis Gil in the Vilanova goal had a good game too and saved his team in the final minute as Barça, now back to full strength, launched themselves forward in search of the winning goal.

After a bright start, with the home crowd right behind their team, the hosts took plenty of risks and Fernadez had to be at his best to keep them out, but it was Reinaldo who opened the scoring after coming off the bench and putting away a Borregan cross. Although there were quite a few more chances before the break, there were no more goals.

Piece of bad luck and a card for Ŕlvarez

Two minutes into the second half a counter attack from Vilanova brought them level as Manel Garcia beat Sergi Fernández, who soon after made a series of great stops to keep his side in the game before Mia Ordeig latched onto a Panadero pass to again put Barça ahead.

Now it was Luis Gil’s turn to work and he frustrated Barça’s attacks before a piece of bad luck drew Vilanova level. Carles Rodríguez’s shot coming off the post and then hitting Sergi Fernández’s back to make it 2-2.

Vilanova had chances to score as Barça completed the cycle of 10 and 5 fouls and Manel Garcia was also unable to put away his chance after Pablo Álvarez’s card. The referees reckoned that Álvarez had punched a Vilanova player, though the Argentinean and the rest of the team seemed very surprised at the decision.

Barça held out with just three outfield players for the next two minutes and finally the teams shared the points in the second week of the OK Lliga.