Barça made a winning start to the OK Lliga with a 7-2 win over CP Monjos, with goals from Panadero (2), Gual (2), Reinaldo (2) and a final strike from Marc Juliŕ. 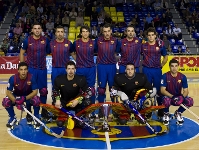 Both teams made it clear that they wanted to entertain from the start and Barça looked to impose their speed on the game, going one up after just three minutes through a
Sergi Panadero goal, but the visitors, newly promoted, but with an experienced squad, were determined to stand toe to toe with their hosts and they were on level terms just two minutes later.

It was a vibrant game and only a good stop from Egurrola stopped the visitors from taking the lead again soon after – but it was Barça who got their second when Marc Gual rounded off a move.

Borja Ferrer was then shown a blue card for a foul on Marc Torra and from the resulting free shot Reinaldo García made it 3-1 at the break. 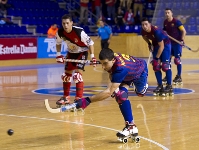 Five minutes into the second half, the referees awarded the visitors a penalty for a push by Panadero on Ros, but Xavi Brichs found himself up against the excellent Egurrola who not only saved the shot, but also the follow up.

Then Panadero began a move from the back and after involving all the other three outfield players (Ordeig, Gual and Torra) he finished it off himself with a well placed shot from the left.

The fifth came from a Reinaldo free shot and with 10 minutes left, Ros failed to put away another penalty for the visitors, whilst Gual made no mistake after he’d come back on after treatment to score the sixth.

The seventh was for the youngster Marc Juliŕ, making his league debut to finish off a well deserved 7-2 win.