Barńa took the Spanish Super Cup with a convincing 1-5 win over Tecnol Reus Deportiu in the final. With four goals in the first half, the team controlled the second half and lifted the title. 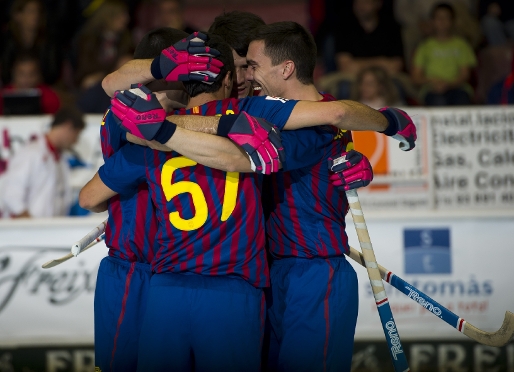 Referees: Valverde and GarcĒa
Alberto Borregßn lifted the roller hockey section’s fifth Super Cup at the Ateneu de Sant SadurnĒ by beating Tecnol Reus in the final. It couldn’t have been a better start to the season, nor for Gaby Cairo’s debut as coach and although the team have had just a couple of weeks to work together, they made up for any rustiness with plenty of character and offered a foretaste of what will hopefully be a spectacular campaign. 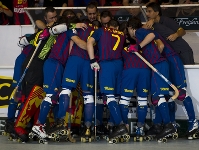 With an experienced starting five made up of Egurrola, Borregßn, Ordeig, Panadero and Torra, Barńa were on the attack from the off and Reus slipped into their counter attacking style causing Egurrola into a fine stop. With the entrance of Reinaldo and Gual, Barńa got their first goal, when the Argentinean put away a penalty. A minute later the lead doubled when Reinaldo this time combined with Pablo ┴lvarez who scored at the far post and then almost immediately afterwards, Gual made it three.

Reus were looking ragged now and a bad foul by Ra³l MarĒn on Alvarez, which led to a penalty which Alvarez failed to put away before Reinaldo was again on target with a placed shot to send Barńa into the break leading by a clear four goals. 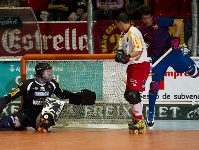 Barńa began the second half with the same intensity, but they were building up fouls and on 35 minutes they had committed 15 against just 4 for Reus and Raul Marin took advantage to score from a free shot after the first cycle of 10 fouls, though he couldn’t do the same after the end of the next cycle.

Five minutes later, Caldu committed a clear penalty, but Mia Ordeig failed to score, alongside Panadero, who missed his chance after Molet saw a blue card.

The game was finally wrapped up by another goal from Pablo ┴lvarez, who rounded off a good team move, whilst there was also time for the youngster Xavi Barroso to take part in the game.