Barça Sorli Discau disposed of Vendrell with a clear 6-0 victory at the Palau and continued to march on in their league campaign. 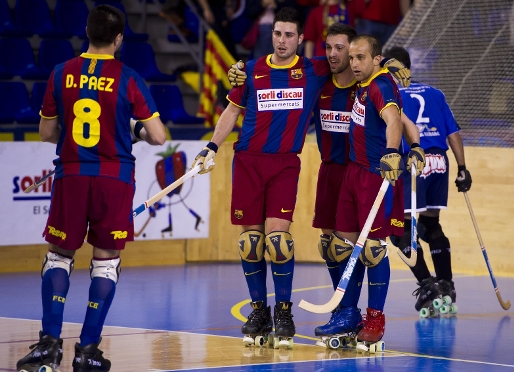 Referees: García and Martínez
Barça have to win every game left in the league now and Vendrell was a good chance to make amends for some of the mistakes made in the first half of the season. The team had prepared the game well and Reinaldo opened the scoring after just two minutes, with the second coming a minute before the break. Two quick goals at the start of the second half were followed by a fifth and sixth from Adroher and Torra.

Ferran Pujalte continue to win and Reus and Liceo did the same, beating Blanes and Igualada, respectively.

Barça Sorli Discau didn’t let Vendrell settle and Reinaldo García put them one up after just five minutes. However, after the goal Guillem Cabestany’s team organised a well positioned defence that created plenty of problems for the hosts.

Even so, Barça could have scored another as Nalo saw his penalty saved by Carles Grau. Straight after, Barça committed a penalty themselves, but Vendrell’s Jordi Garcia also failed to score.

Pujalte used his bench wisely to freshen up the team’s performance and Mia Ordeig made it 2-0 before the break by finishing off a nice move and giving Barça a comfortable lead to go into the second half.

The lead was soon doubled as Adroher set up Carlos Lopez for the third at the end of a counter attack and almost immediately afterwards Ordeig made it four.

Jordi Adroher caught out the tiring Vendrell defence to make it five and after Aitor Egurrola, who had been a virtual prisoner till then, saved another Vendrell penalty, Marc Torra raced to the other end of the court to leave it at 6-0.