Roller hockey’s Barça Sorli Discau beat CH Lloret 8-5. Four first half goals from Ordeig showed just how strong Barça are this season and they are now on their own at the top of the table.

Lloret were also unbeaten to date, but Barça managed to play a serious game and had Mia Ordeig to thank in the first half, although a Lladó hat trick for Lloret livened things up a bit in the second.

Both the suspended David Páez and injured Reinaldo García missed the game. 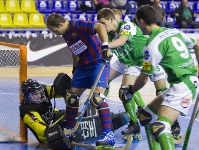 Barça Sorli Discau went out to attack, and as expected Lloret took a more defensive attitude. Mia Ordeig beat Ferran Serra in the 7th minute to set the visitors on their way.

It was that man Ordeig again 8 minutes before the break, with a penalty that didn’t go down at all well with the home fans.

Two minutes later he completed his hat trick, and then added yet another to make it 4-0, the latter also from the penalty spot. 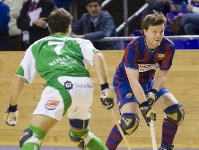 Lloret woke up a bit after the break, and Lladó transformed a penalty of his own. But Barça immediately responded with a cracker from Lluís Teixidó.

Despite being outplayed in most departments, the host never gave up and Rodri then notched up their second.

But it was all Barça. Mia then grabbed his fifth, and Adroher made it seven. Lladó, meanwhile, managed to complete his consolation hat-trick, but he was a lone force in a Lloret team that was generally outclassed.

Casalí then added a fifth for the home side, before Mia Ordeig, with 8 seconds to go, rounded of an extraordinary day with his sixth goal and Barça’s seventh. 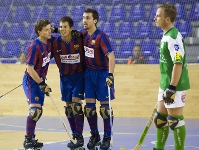