Before the start of the game, the president of the RFEP, Carmelo Paniagua, handed over the OK league trophy 2008-09 to team captain Alberto Borregán.

Vilafranca attacked from the very first minute through the experienced Roger Boira and Sebas Moreno but failed to convert pressure into goals. For Barça Sorli Discau, Panadero (now fully recovered from injury) looked dangerous in attack. However, the opening ten minutes remained goalless.

David Páez broke the stalemate in the 14th minute from a counterattack and then Carlitos López made it 2-0 before the break.

In the second half, Barça looked more comfortable and began to force Vilafranca back. It took just three minutes for Alberto Borregán to add a third. The visitors could have pulled one back straight away but Aitor Egurrola stopped the shot from Sergi Miras.

Barça captain Borregán got the fourth and David Páez was unlucky not to increase the score when he hit the crossbar twice. 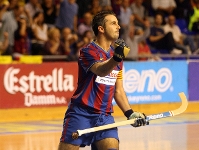