Barça Sorli Discau lost in the Palau to Igualada after an intense game which was decided by two second half goals by the visitors.

Barça Sorli Discau suffered its first defeat in seven OK League games, going down to Proinosa Igualada. The visitors equalised in the second half and then went on to score the winner.

As was expected both sides played fast, attacking hockey from the word go. Barça came close through Carlos López, while for Igualada Marc Navarro put the home side’s defence to the test.

This was followed by chances for Beto Borregán, Edu Fernández and Panadero which both Aitor Egurrola and Albert Balagué saved superbly.

Halfway through the first half Raül Marín fired in a shot which Egurrola turned away. Seconds beforehand the Barça captain had hit the post.

Another of the highlights in the first period was a move ten minutes before the break that began with a turnover by Carlitos which Beto narrowly failed to convert.

Yet only two minutes later Barça Sorli Discau opened the scoring. Jordi Creus went through one-on-one with Egurrola, and after the home keeper pushed the ball away Borregán stormed up the court and this time did manage to get by Balagué.

The last eight minutes of the first period were battled out fiercely, with neither side prepared to concede an inch.

Sergi Panadero looked to put in David Paéz when perhaps he should have finished off the move himself, but luck was not on his side. Baliu was also unfortunate to see his shot come back off the bar.

Igualada pull level and then ahead

Right at the start of the second half Jordi Creus beat Egurrola to make it 1-1. Seconds later Marín missed a penalty that would have put Igualada ahead, and Creus and Busquets mounted a series of assaults on the home team’s goal.

Barça tried to tame the visitors but in spite of having chances of their own, such as a loose ball which Carlitos was not able to get to, they were gradually being pinned back as the clock ticked down.

It should be said that Barça were awarded no penalties even though both Beto and Panadero went over in the area. 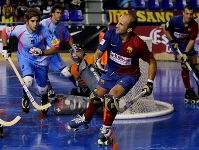 Barça’s lack of control was taken advantage of by Igualada. Goalkeeper Balagué broke up an attack led by Borregán (in which Panadero lost his stick) and a counterattack by four Igualada players against David Paéz and Sergi Panadero led to Edu Fernández slotting home what proved to be the winner.

The Palau once again saw Barça Sorli Discau lose. Last season the side lost in the play-offs against Noia and Reus. Igualada had beaten Barça too but that was also in a knockout tie and Joan Carles was playing for the azulgrana. 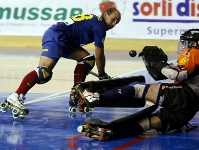