Barça Sorli Discau are on top of the OK Liga table after five games having beaten Roncato Patí Vic. Quim Paüls’ side recorded a convincing victory at the weekend to move into first place.

The Blaugrana roller hockey side produced one of their best displays of the season so far in an intense encounter that left them as leaders of the league. Both teams went into the meeting locked on ten points, but Barça won the day and edged ahead in the rankings.

Carlos López retained his place in the side while Borregán remained out through suspension and the Argentinian forward celebrated by netting one of his team’s three goals, while Sergi Panadero and David Páez netted the other two. 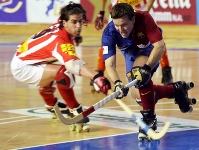 In the opening minutes Titi Roca was unable to convert a penalty for the opposition as Egurrola was at his best and the Barça keeper was in action moments later when he had to make another good stop to dent the Vic side.

The majority of the Blaugrana’s play went through López and he set up a good chance to open his account but Carlitos could not convert. In what was an open encounter, Roca, Bancells and Galán went close at one wne while Panadero and López tested the visitors’ keeper at the other. It was Panadero that then netted the first goal with 24 minutes on the clock. 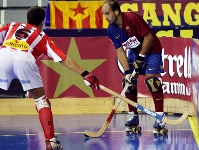 At the start of the second half the intensity remained the same and it was Vic that that went close early when Romŕ Bancells came off the bench to test the keeper before Panadero continued to probe at the other end.

It was not until the 34th minute of the game that Barça finally pushed themselves into a commanding lead as Masoliver saw a shot kept out, but López was on hand to tuck home the rebound.

Vic were looking tired by now and Paéz looked take advantage by netting Barça’s third and final goal to put the result beyond doubt.

López was then given a penalty chance but could not take it after Roca had clearly fouled in the area. Jordi Adroher also looked to add to the scoreline as the game began to click back into gear.

Borregán followed the game from the tunnel and the club captain will now wait to see what decision the committee makes about the red card that he received against Noia. 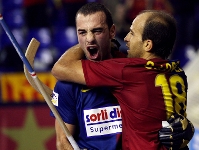 Other incidents: There was a minute of silence before the game in memory of former OK Liga referee, Xavier Roca.