A penalty shootout (4-3) and a late throw from Negro Pįez put defending champions Barēa Sorli Discau out of the European Cup at the F8 in Bassano.

A penalty shootout was Barēa’s downfall, with Negro Pįez converting the definitive goal.

But before that, we had seen sixty minutes of exceptional roller hockey in the second quarter final match.

It was a nail-biting affair for Alberto Borregįn as his side and Reus Deportiu produced a game to be remembered by anyone who loves this sport. 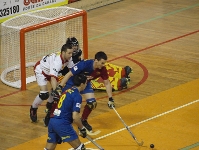 Carlos López and Mia Ordeig were the first players to put Reus keeper Guillem Trabal to the test with some intimidating early plays, and then Carlitos hit the bar with a tenth minute strike.

But Reus soon reacted. Pedrito Gil, in the 11th minute and Toni Sįnchez in the 19th both shot close.

The fans were loving the display, heartily applauding some quality play from Reus’ Negro Pįez, Pedrito Gil and Matķas Platero, and some terrific Barēa one-twos that neither Teixidó nor López were able to finish off. Egurrola and Trabal also enjoyed some deserved applause.

But then Matķas Platero committed a penalty offence, and Miquel Masoliver coolly converted straight down the middle to put Barēa a goal up, with Reus keeper Guillem Trabal yellow carded for moving too early. The score remained 1-0 until the break. 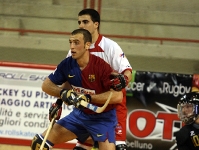 There was more brilliance in the second half. Egurrola saved a powerful Reus strike, and Pedrito Gil picked out Marc Gual with a killer pass that was not finished off.

It was end to end stuff, and then Jordi Garcķa took a gamble with a long drive that found its way straight through a poorly positioned Barēa defence to level affairs at 1-1.

Second yellows for Maso and Vado

It was also a toughly fought game. Miquel Masoliver was carded for bringing down Marc Gual, and second later Maso was shown his second yellow when Toni Sįnchez went to the floor. With Masoliver in the sin bin, Barēa had to face a Vado penalty, but the Reus man failed to convert.

Going into the last ten minutes, Barēa could have regained the lead with a Sergi Panadero free hit that was just inches too high, but instead it was Ordeig who scored for Barēa to set things up for a frantic ending.

Pedrito Gil then showed his impeccable attacking skills to equalise in the 21st minute, but with a minute to go the thrills reached fever pitch when Reus were awarded a penalty. Egurrola brilliantly saved Platero’s effort to send the game into overtime. 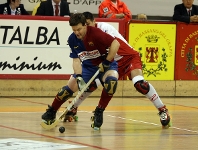 The first five minutes of extra time saw much caution, with neither side wanting to leave themselves over-exposed at the back. But Masoliver for Barēa and Marc Gual for Reus both had excellent chances.

The second period saw much of the same, and then it was the Barēa keeper who once again kept his team alive with back-to-back saves from Marc Gual and Pedrito Gil in the final seconds of overtime.

So it was all down to the lottery of penalties, and even then the sides could not be split, for after the first series of five attempts it was still all square. So, it was on to sudden death, and Barēa’s Teixidó missed while former Barēa man Negro managed to beat Egurrola, and put an end to Barēa Sorli Discau’s attempt to retain the European trophy won last year. 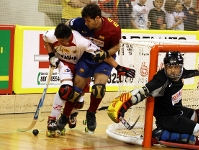