In a tough game, Barça Intersport managed to overcome all obstacles to gain a key victory in the fight for the title. Barça beat San Antonio 29-23, with eleven goals from Rutenka. 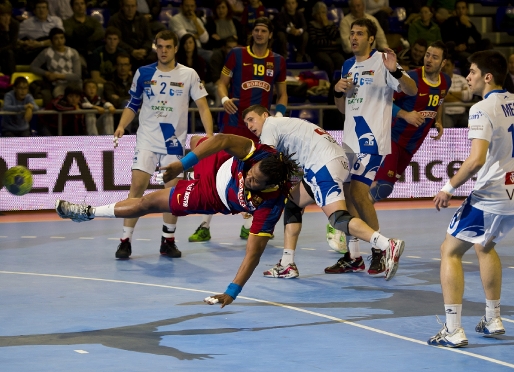 Pavilion: University of Navarra. 1,500 spectators
Barça Intersport carry on their unstoppable march in the Asobal League. The 6th win in 6 games consolidated their top spot in this great start to the competition, above all after their victory at the University of Navarra, where Pascual’s team won one of the most complicated matches of the season. Rutenka, with 11 goals, was one of the players that made the difference, along with Daniel Saric, who saved 4 penalties.

First half, below their normal level

San Antonio began the game on top, and controlled the scoreboard early on. Intersport were not at their best and found it hard to get into the game. San Antonio were never more than 2 goals ahead, however, and Pascual’s players reacted in time. In the 20th minute with 3 consecutive goals, Barça put themselves ahead on the scoreboard for the first time in the match (9-8). In the last minutes of the first half the match was end to end, but Intersport managed to go into the break with a 1 goal advantage (14-13).

Early in the second half, the Barça players struck a decisive blow. A sequence of 5-1, in seven minutes, with three consecutive goals from Rutenka, gave Intersport a 5 goal lead (19-14), the first considerable lead in the match. Intersport easily controlled the rest of the game. With 10 minutes left, San Antonio reduced the deficit to 2 goals (23-21), but 4 consecutive goals, with Rutenka again the main protagonist, decided the game.
Pascual: "Without playing particularly well we were pretty effective”

At the end of the game, the manager praised the win in Pamplona. "In the first half we were not at our normal level, mainly due to lack of concentration. Later, we improved in defense, but didn’t do so well up front at the beginning of the second half we gained a significant lead. We learned a lesson from the first half, and we were more solid in defence, much more concentrated" Pascual said.