Ciudad Real won the XXI edition of the Copa Asobal on Sunday night, beating Barēa Borges 31-34. Barēa put in a great first half, but were unable to deal with Ciudad Real’s improved performance after the break.

As happened in the Super Cup in Cordoba, Ciudad Real again denied Barēa a title, as they first withstood Barēa’s good start and then hit back in the second half to take the game. 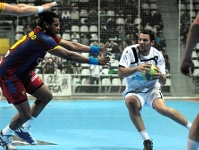 The two top teams in the ASOBAL drew in the crowds for the final in Vigo and they were treated to an impressive first half performance from Barēa, though Luc Abalo first put Ciudad Real 0-3 up with a flurry of early goals. Rutenka, who is always motivated against his ex-team, play maker Dani Sarmiento (8 goals) and the great keeping of Saric pulled Barēa back and by the 13th minute, they drew level at 7-7 when Albert Rocas scored and then Juanin put them ahead for the first time. With Saric making a great penalty stop and a fantastic strike from Dani, Barēa Borges moved further ahead and began to take control.

The team were firmly focussed and with a solid 6-0 defence, supported by Saric, they took a 13-9 lead and although Ciudad Real hit back, they went in with a two goal advantage, 16-14, at half time.

Unfortunately, Ciudad Real came out on fire after the break and with a partial score of 1-6, they turned the score round. Juanin led a mini fightback, but with 15 minutes left, they were still 23-26 down and beginning to tire, as Ciudad Real took control. 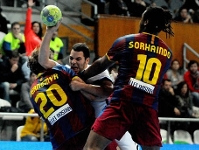 Pascual sent Sjöstrand on between the sticks, but it was Dani Sarmiento who kept the team’s hopes alive, and after going further behind (25-30), they clawed their way back to 29-30 with five minutes to go, but Ciudad Real looked the fresher and were able to stretch away again to take the game and the title. 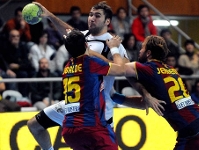