Barça Borges made it eight wins out of eight with a 23-31 win over near neighbours Granollers to confirm their top spot in the league ahead of the break in the competition.

Xavi Pascual’s team faced down a hostile home crowd and led almost right from the start with Lazlo Nagy chalking up four goals in the opening eight minutes, as the team raced to a 22-12 lead by half time. Although they dropped off a little in the second half, they eventually ran out comfortable winners. 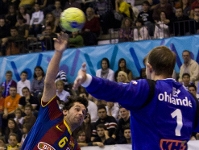 Although Granollers opened the scoring, Barça Borges soon replied and never really looked back as they took an early 2-9 lead. Saric who stopped a penalty and two free kicks, put in a great performance, as did all of the defence, whilst Juanin finished with seven goals and Nagy with eight. It was virtually all one way traffic in the first half as Barça opened up a 10 goal lead 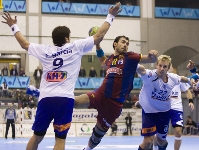 Entrerríos was on the mark after the break, but not until three minutes had gone by with neither side able to score and in truth, Barça’s attacking punch seemed to fade a little, although their defensive solidity, with Saric’s brilliant performance demoralising the opponents attackers, meant that there was no way that Granollers could take advantage. 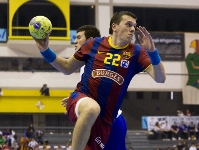 Gradually though, Granollers began to creep back into the game and the confidence seemed to be seeping away from Barça Borges. Ohlander began to impose himself in the Granollers goal and after he stopped three penalties, the hosts moved to within three goals (23-26).

Barça kept their cool and held their nerve though and Retanka led a 0-5 fight back that put an end to any hopes Granollers might have harboured. Not a great second half and a shadow of the first, but in the end Barça did enough to keep their 100% record and come away with the points 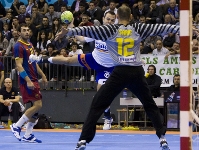