Barça Borges have lost by one goal at French club Chambéry, who led from the start. It was not a vintage display from the Catalans and they have now lost two Champions League games out of four.

The French side took an aggressive approach to the game, and the result leaves Barça Borges in trouble in their group. It was clear from the outset that FCB were going to have their work cut out against a side that defends so strongly, switching effectively between 6-0 and 5-1 systems. 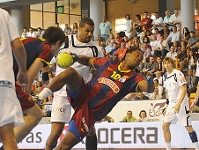 Ironically it was a Frenchman, Cédric Sorhaindo, who opened the scoring for Barcelona, which was the 9,000th for his team in European competition. Chambéry dictated the kind of rapid pace that Barcelona enjoy so much, yet the Catalans struggled to put together their characteristic style.

Philippe Gardent’s side barraged the pressure on constantly, and their early 6-5 lead was stretched to a more convincing 11-6, while their keeper Dumoulin made a series of providential saves, even from the penalty spot.

A French timeout was used to rest the home players a while, but it seemed to be Barça Borges that benefitted most, as they were soon back in the hunt (11-9).

Two down at the break 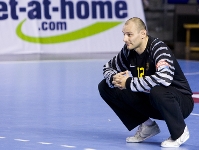 With Nagy sin binned, Chambéry were able to go four ahead again, but Barcelona again responded by narrowing the deficit to two, which is how things stood at the break (14-12).

Barça Borges needed a good start to the second half, but didn’t get it when Roine banged in three goals on the trot. Five down, it was time to send on Sjöstrand for Saric, but this did little goal, because all the saves were being made at the other end (21-16).

A 0-3 led by Sorhaindo gave new hope, which was further bolstered by goals from Rocas and Rutenka to make it 24-22. Chambéry were clinging on for dear life, and Barça Borges were on fire, especially when home player Gille was given his marching orders. Had Rutenka not hit the bar in the final minute, there might have been a different story to tell, but as it was, Barça come back from France in bitter disappointment. 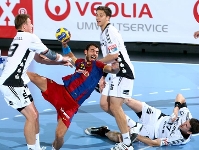