Iker Romero has left Barça Borges as a European champion. "You couldn’t dream of a better ending than this", he said after winning the title for the second time. 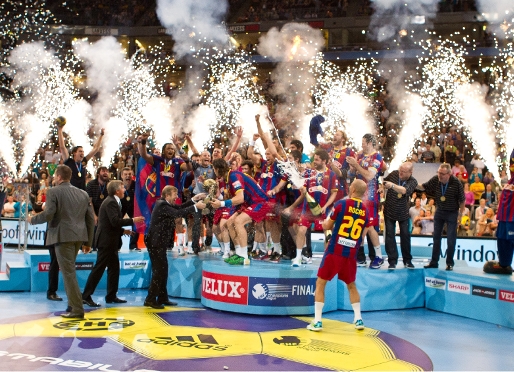 Barça Borges are on their way back to Barcelona with the European Cup trophy. The club left the Lanxess Arena for Cologne airport where a charter flight was waiting to take them back home.
After winning at the Lanxess Arena against Ciudad Real (27-24), Barça Borges have crowned a season in which they also won the Liga Asobal. An emotional Iker Romero is now leaving the club after eight seasons.

Here are the comments made by the players after the Champions League final.

"After eight years at the club of your life, so many emotions, so many loving moments, it’s hard. But if you have to go, there is no better ending than this, the European Cup”.

"First I dedicate it to my family, who have always been there for me. And to all the people who wear this badge, the Barça people who have supported me for eight years. These last months have been very tough, knowing I am leaving, but there have been so many shows of affection. And of course the club that has made me who I am. And all the squad, who’ve been marvellous and who I’ll miss a lot".

(On Saric) "Messi is on another level, in another galaxy. And Saric was at an incredible level, he showed he’s a great keeper, one of the best if not the best. And he is a real gem of a person. I will miss him".

"We are happy because today we are European champions and yesterday the football team was too. Barça have a high standard, be it football, handball or basketball or the other sports ... I think last year was an accident and this year had to be ours and in the end we deserved what we got”.

"To keep Ciudad Real down to 22 goals is incredible”. 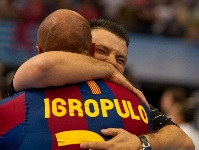 "The team not only won the Champions League but also came through the group of death, had some difficult draws and never had home court advantage. We have beaten the last two champions and done so quite comfortably."

"Saric deserves this Champions League more than anybody because he has never won such a big title. This adds to his recognition. Last year he felt responsible for the defeat and so I’m especially happy for his two games in this Final Four."

“I also want to remember players that have helped us win this Champions League and aren’t here anymore, Demetrio Lozano, Joachim Boldsen and David Barrufet, for example."

"What I feel is indescribable, I’m so happy. Last year we were crying when we left here because we had lost. Now we are being rewarded for a long and difficult season. To win the league and Champions League is incredible."

(On Saric) "I have no words to describe the game he played. I have no idea what his save percentage was! He helped us a lot, he was amazing!"

"I feel so happy. It was so emotional. You remember all the work you have done this year, all your team mates, your family, the people that are with you. Now is the time for us all to enjoy this moment.”

"It is very difficult to be champions". 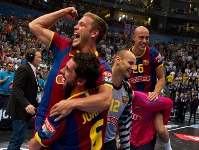 "I don’t know how to explain it. It is a thrill I have dreamed of since I was a kid; you see this kind of thing on TV. I have no words! It’s incredible! "

"It is my first European Cup and after three years of problems and criticism we have now won the League and the Champions League. It’s amazing!"