The legendary ex Barcelona handball goalkeeper David Barrufet received an emotional tribute, on Sunday evening, in the Palau Blaugrana, which was dyed yellow, the colour Barrufet wore when he played for the club.

More info
Following the game between Barēa Borges and Chambéry, the French side, that ended in a 38-23 win and classification of Xavi Pascual’s team for the knockout stages of the Champions, the lights of the Palau Blaugrana were dimmed to make way for a tribute to David Barrufet, a player who wore the Barcelona shirt for 22 years (21 seasons), winning 71 titles defending the Barcelona goal..

On May 30, 2010 Barrufet retired, but it wasn’t until this Sunday that the Palau Blaugrana was able to pay tribute to his dedication to the club and retire his yellow shirt, with his name and number 16 on the back - a shirt that from Sunday can be seen high up in the rafters of the indoor stadium, together with shirts like Enric Masip’s, another ex FC Barcelona handball legend, and current technical director of the handball section.

During the almost thirty minute tribute to David Barrufet, the Palau Blaugrana was coloured yellow with the shirt shaped cards that the fans wave in a very emotional tribute. A video, with highlights of the former goalkeeper and captain of the handball team, kicked off the emotional ceremony.

Another ex Barcelona handball player, Fernando Barbeito, directed the tribute to Barrufet and immediately on appearing on the floor of the Palau, illuminated by a spotlight and also wearing a yellow shirt, he paid tribute to the influence of Barrufet’s parents and brother in making him what he is today. 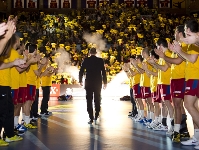 The Barcelona Borges first team made a tunnel for the entrance of the star of the evening, David Barrufet. A visibly moved Barrufet entered the Palau with tears in his eyes to the applause of the audience and cheered by fans with chants of "Barru! Barru! ".

Then, the Spanish Handball Federation awarded him their gold insignia and likewise, the Barēa president Sandro Rosell, accompanied by Edward Coll, director of the handball section, also awarded Barrufet a plaque in appreciation of his dedication to the club, the colours and the Barēa ethos.

Recognition of the figure of Captain

The institutional part of the ceremony was followed by appearances on court by Barrufet’s former colleagues, former coaches, and friends, including Valero Rivera, who also wore yellow. The captains of Barca's other professional teams were also present. Alberto Borrego (hockey), Javi Rodrķguez (indoor football), Roger Grimau (basketball), Carles Puyol (football) and Laszlo Nagy (handball), all handed their captains armbands to Barrufet in recognition and admiration.

Presence of his loved ones 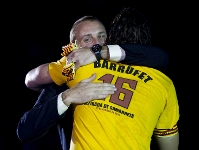 Barrufet was accompanied by his wife Mari Carmen, his daughter Noa and his son Ian, carrying a handball that ended up high in the Palau Blaugrana, following a string of passes between the different goalkeepers of Barēa’s handball academy teams where Barrufet started his career and that the former Barcelona player Lorenzo Rico finally received, revealing the now retired David Barrufet shirt in the upper part of the arena.

"The number 16 yellow jersey will be forever present in the Palau Blaugrana" Fernando Barbeito said, from the court’s centre circle. David Barrufet took the floor and began his speech by congratulating the hockey section on their Spanish Cup win. The star of the evening assured everybody that he had not prepared a speech and with the emotion he felt, he wanted to address the audience from the bottom of his heart. 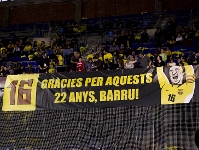 Barrufet thanked the Barcelona President, the board and everyone who had worked to make "this incredible honour" a reality. He also mentioned his family, his former coach Valero Rivera, his former teammates, and employees of the legal department of the club, where he is now working. Barrufet had a special mention for "all the people in the Palau who have given me so much... If I can I pay back a tenth of what you have given me, I will be very happy. You are the greatest trophy of all."

Last lap of honour in the Palau

The traditional "Long live Barēa and long live Catalonia!" ended the plethoric Barrufet’s intervention where he once again made a lap of honour on the court at the Palau Blaugrana, in the presence of the President of the Generalitat Artur Mas, among other personalities, and where banners like "Thank you for these 22 years, Barru," or "When the story ends, the legend begins. Thanks Barru”,. perfectly reflected the unanimous feeling of rendition to the great figure of David Barrufet.