Barça Alusport on their own at the top (7-2)

Barça Alusport on their own at the top (7-2)

A great start, with two goals inside the first minute, gave Barça Alusport a valuable win over Triman Navarra and leaves them out on their own at the top of the table. Despite missing Igor, Saad and Jordi Torras, the team put in a great performance.

Venue: Palau Blaugrana. Attendance: 1.517 .
It needed just 44 seconds for Fernandăo to set up the victory, especially important as it came against a close rival, who had been enjoying an excellent run of wins themselves and was achieved despite the injuries to a number of key players. The whole team performed, but Lozano was outstanding. 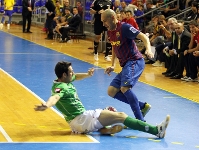 Jordi Torres pulled out before kick off with a thigh injury, but Lin was back after injury and Carmona was able to call on three players from the reserves, including Tolra who put in plenty of time on court. Fernandăo’s great start set up the first half and Lozano soon stamped his authority on the game, tackling back and creating danger up front. As well as Fernandăo’s touch up front and the great goal from Lin, Lozano was one of the best features of the game.

Juanito and Cristian, especially the Navarran keeper, ensured there were no more goals in the first half, though Roberto rattled the post for Triman and Wilde, Lin and Ari, as well as Lozano, all had their chances for the hosts

Gem from Lin and reward for Lozano 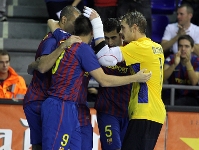 Triman Navarra came out determined to get back into the game after the break and Juanrin missed a great chance to get a goal back, but the next strike came from Barça, when Lin received a pass from Fernandăo to make it 3-0. Lozano helped to make it four as he charged down the line to cross and Isi put through his own net.

Mimi finally got the visitors off the mark , as they threw everything at the hosts, but immediately afterwards, Lin scored a spectacular fifth - already a candidate for goal of the season- to douse any hopes the Navarrans might have had. Juanra pegged one back from a free kick with three minutes left, but Lozano brilliantly set up Wilde for goal number six, before scoring himself with a penalty to round off an excellent individual and team performance.