Following qualification in Latvia, the designation of the Palau as one of the venues for the Elite Round and Tuesday’s draw, it was back to work for Barça Alusport who scored three goals in 47 seconds to settle affairs. 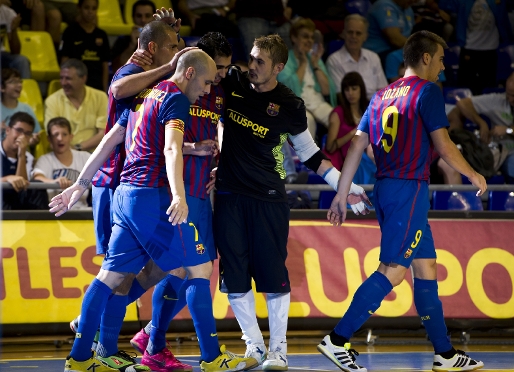 More info
Barça Alusport are now 5-0 in the competition after overcoming a decent Umacon Zaragoza side that managed to stay in contention until an amazing 47 seconds in which Barcelona scored three times.

There was a welcome reception for Carlos Muńoz, who was back at the Palau for the time, now playing for a side that, despite today’s result, is still one of the candidates for a playoff place. But once the game was under way, it took just two minutes for Saad Assís to supply Dídac with the ball to make it 1-0 from long range. The fans were still celebrating when Wilde almost made it two.

Barça looked in command, but Joan Linares then showed great opportunism to score into an empty net and draw things back level.

It was end to end football at this stage, but after missing a few more chances, Wilde finally found the target with a spectacular overhead kick. It was such a goal that almost everybody was still admiring the replay when Sergio Lozano made it 3-1.

Marc Carmona’s side was in extraordinary form, and without time for anybody to catch their breath, Wilde found the net again. Three goals in just 47 seconds of actual play meant that Barcelona led 4-1 and had the game totally under their control.

There was still time for one more before the break, this time from Fernandăo, with a trademark goal from a narrow angle, bringing the first half to the perfect end.

Second half a formality

The second half was a far less frantic affair. Barça had already done the hob and concentrated on wearing down the clock. Umacon Zaragoza also lost spark as it became more and more obvious that there was no way back for them. Although both sides did have a few chances to add to the score, there were no further goals, and FCB continue with their one hundred per cent record in the competition.