Match under control at the Palau (5-2)

Match under control at the Palau (5-2)

Barēa Alusport became provisional league leader, on their own, after beating Manacor in the brought forward game of the fourth match-day. It was a pretty comfortable win, mainly due to a very good first half. 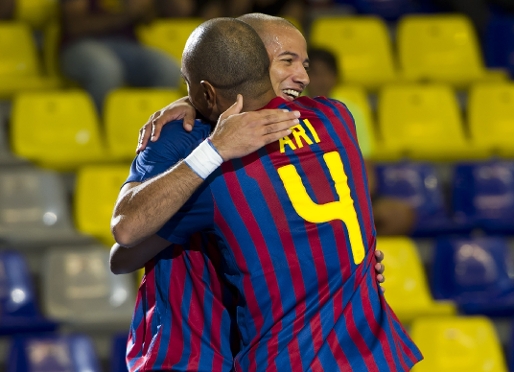 3 from 3. Barēa Alusport beat Fisiomedia Manacor, and added another victory in the league. Carmona’s superior team had control for practically the whole match, against a rival side who were willing, but suffered a lot in the first twenty minutes. 2 goals from Ari Santos, and 1 from Lin had the game tied up before the break. Wilde and Gabriel, who made his debut in a Barēa shirt, certified the victory in the second half. 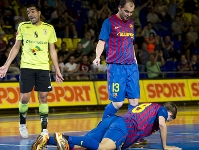 The game started with Fisiomedia Manacor willing to do battle with the help of an ex-Barēa player: Juan Carlos Lopez had the first good chance with a shot that Cristian saved with his feet. It was the first warning but only a mirage, as Barēa took absolute control of the match from the early stages. Proof of that was the early goal to make it 1-0, following a brilliant move by Igor. The “Wizard of Fortaleza” turned the Manacor defence inside out, and passed to Ari Santos, who scored at the far post. The goal settled the Barēa team, who made it 2-0 shortly after with a goal from Lin, who picked up a failed attempt from Wilde.

Alusport, playing with a lot of confidence, began to move the ball around with ease, and their pressure game, high up the pitch, helped them to recover ball after ball. A time-out, called by the visitors, was needed, but the minute break didn’t change the script. Barēa Alusport closed down their opponents, and gave nothing away in defence, with Cristian a mere spectator.

Saad came very close to getting the third goal, but the game was losing continuity. Martin Amas almost took advantage of the situation, but his shot hit the bar. This effort woke up the Barēa players. A lethal counter attack by Igor, who was fouled by Tońete, ended with Ari Santos scoring to make it 3-0

Igor and Wilde were still doing their own things, and forcing fouls, which ended up with a double penalty. But a possible 4-0 ended in 3-1. Tońete blocked an Ari Santos shot, and a deadly counter-attack, with a two against one situation, ended with a goal from Javi Rodriguez. 3-1 at half-time.

A pace that suited the away team 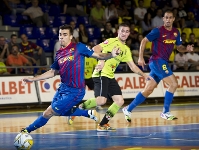 The second half began with the bitter aftertaste of the away goal, and this affected Alusport at the start of the second half. Manacor began to believe in their possibilities and were getting closer to the Barēa goal. Carmona’s players were off their game, and the match was turning in Manacor’s favour.

Barca Alusport came back with a counter-attack led by Sergio Lozano, that ended up with a shot from Fernandao, and a free-kick from Saad, just outside the area. Both moves came up against a very good Tońete, who undoubtedly prevented a much bigger scoreline. But the extra gear that the home side found ended with the reward of a goal from Wilde. The Brazilian was not going to fail in another Barēa Alusport victory. Goals from Gabriel, his first for Barēa, and an away goal in the last minute, from Paulinho, closed out the game.