Barça’s Futsal team won their first ever game at Azkar Lugo, which keeps them in second spot in the league, just a point behind leaders Lobelle.

0-2 up at half time, Marc Carmona’s team finished 2-5 winners with goals from Javi Rodríguez, Igor, Torras, Carlos and Chico, as well as a towering performance from Cristian, a win they dedicated to the injured Ari Santos. 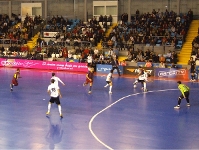 Azkar are one of the youngest teams in the competition, but they are a tough test and Barça had only managed four draws, with six defeats in their ten visits before this year’s visit and with the team potentially suffering from the international break, this was certainly not set up as an easy match and the coach rang the changes throughout with plenty of subs –four changes in the first three minutes of the game.

Cristian was keeping a sharp eye on the Azkar attacks, mainly led by their international Matamoros and with the defence looking strong, it was just a matter of time before the goals came for Barça and on 7 minutes Javi Rodríguez linked up with Wilde to open the scoring. That goal rocked the hosts and Barça’s patient build up was matched by some strong defending and quick counters, one of which, led by Lin, Igor put away for the second.

Torras and Cristian settle the result 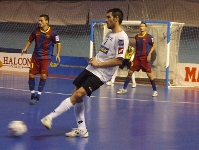 Azkar received another body blow after the break, as Jordi Torras got a slightly fortunate third, but they hit back with a goal from Antonio, set up by their captain Mimi, who nearly got a second soon after, only for Cristian and the post to keep him out. Barça weren’t going to let them back into the game though and just a minute later Carlos fired in an unstoppable shot to re-establish the difference.

Chico took advantage of a mix up in the hosts’ defence to make it five in the last minute before Miguel scored a last gasp consolation goal for Lugo. 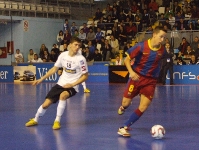