Marc Carmona’s team went for the opposition and beat Caja Segovia with really hard work, and the series is wide open as they now travel to Segovia for the next leg. 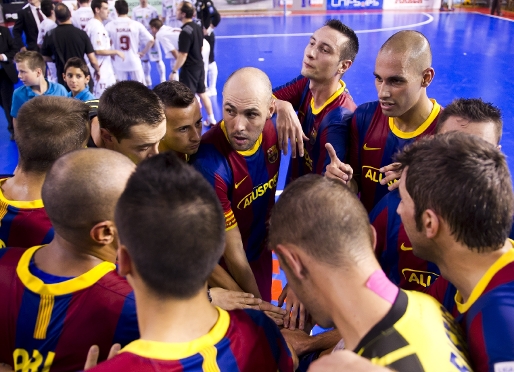 Yellow cards to Carlos (Barça) and Esquerdinha and Geison (Segovia).

After last Friday’s setback, when Jesus Velasco’s team won by just the 1 goal, Barça couldn’t afford to lose. The team responded to the support from the stands, and the need to win, and deservedly beat Caja Segovia, who were very confident after the first leg win. Barça gave an exhibition, with total commitment, in the 1st half, where they simply dominated their rival, and in the 2nd half they knew how to battle against a much improved Segovia, and the tiredness accumulated.

It now all starts again, but now in the Pedro Delgado, in Segovia, as the stage, but Barça will travel there feeling a lot better after this second match. Carmona’s side, with an explosive starting five, and the return of Cristian in goal, took command of the game very early on. 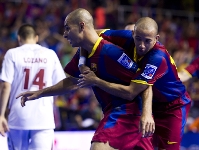 Igor had the 1st chance with a subtle touch that has went just wide. Caja Segovia suffered a lot in the opening minutes trying to move the ball. The crowd were putting almost as much pressure on Segovia as Barça, and the away side did everything they could to keep the ball away from their goal. Mati came on for Esquerdinha to help gain possession and calm the situation down a bit. The wonderful Argentine player led his team, with the ball glued to his feet, which slowed down Alusport’s initial momentum, and caused them to shoot from distance. Lin and Saad both tried their luck, testing the reflexes of an inspired Cidăo. 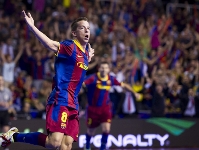 But Barça kept knocking on the door and Igor had a chance with an excellent shot that Cidăo saved well. The home side deserved a goal and found it with a trademark Fernandao shot, into the top corner, to put Barça 1-0 up in the 8th minute. A minute later, Igor made it 2-0 with a great solo effort, sending the home crowd wild. Segovia called a time-out immediately as they were being overwhelmed by the Barça avalanche. On the restart, Igor went close to getting the 3rd goal, with Alusport totally in control, Javi Rodriguez almost scored with a chip, Jordi Torras hit the post, and finally Lin scored with a sensational header to make it 3-0. At the other end Christian had nothing to do until 7 minutes from the end of the half. The defense was brilliant, recovering balls in midfield and intercepting passes. The first half ended with Barça in total control. 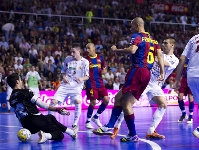 The second half didn’t start so well. Caja Segovia got off to a strong start and good play by Sergio Lozano ended in a Carlos own goal, when he tried to intercept a pass aimed at Esquerdinha. Barça responded immediately and Cidăo had to save from Torras, and at the other end Cristian saved a Lozano effort. Barça were tiring and being pushed deeper, but there were chances at both ends.

The visitors had improved a lot after the restart, testing the Barça defence, who resisted well, and Barça got back on top and had a couple of good chances, one of which Cidăo saved from Lin The referees ignored a clear hand-ball in the visitors box, before Cristian was forced to make a save from Geison.

Segovia had a couple of good chances, like the shot from Esquerdinha that struck the post and a double effort from Borja that Cristian saved spectacularly. The last minutes were tense, with end-to-end football, and the away side had a penalty shout turned down.

David made it 3-2, picking up a rebound, with just two minutes on the clock, to set up up an emotional finale. The Palau crowd got behind Carmona’s side, which had resisted everything thrown at them, including the rush-goalie that the away side tried, and Torras scored with almost the last kick of the game, to seal the win for Alusport in the 2nd match of this great series.