The coaches of Juvenil A and Juvenil B at Barça, both former players, know all about clásicos at the Camp Nou. Ňscar Garcia and Sergi Barjuan tell us about Monday’s match.

“It will be a very nice match because they are both by far the best teams in the league and I’m convinced Barça will win”, said Ňscar Garcia, coach of Barça’s Juvenil A, a team that has it own particular derby against Espanyol this weekend in the Division of Honour. “Like all clásicos, whoever is wherever in the table, won’t matter a thing”. 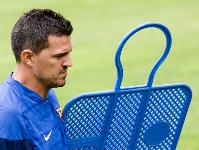 On Barça and Real Madrid’s players, Ňscar Garcia says “Madrid don’t need many complexities, they are fast players that know how to use space and are very effective… but for me, Barça are better not just up front, but in the middle and in defence”.

Asked who he thinks will be the star player at the Camp Nou, the Juvenil A coach said “it is hard to say who will stand out in games like this … I am sure that the everybody in the Barça first eleven will play well and they’ll win the match”, said Ňscar Garcia.

Everyone wants to play

The Juvenil B coach, Sergi Barjuan, referred to his own personal memories. “I remember that every player wanted to play games like this, you need no extra motivation from the manager or anybody to play these games because you can already sense the tension going into it … I remember the Camp Nou filling and putting pressure on the opposition and that makes it harder for the other team”. 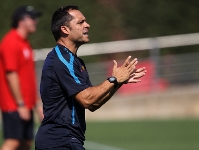 Barjuan added that “these are three very important points, but if you win this game and then lose at grounds where you shouldn’t lose, it all counts for nothing … but you can’t afford to drop these points, you have to win because as things stand, they are crucial points … Barça and Madrid are even winning at grounds where it’s usually hard to win, Barça are getting points all over the place. But the way things are going, any points dropped in the clásico will make a big difference”, said Sergi Barjuan. 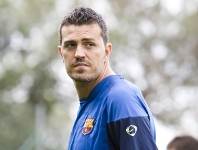 Ňscar and Sergi against Madrid

When he played for Barça, Ňscar Garcia was involved in three Barça v Madrid league games at the Camp Nou and they all ended in 3-0 home wins. Those were in 1995/96, 1997/98 and 1998/99, and Ňscar Garcia remembers “there is nothing quite like winning when you play against Madrid. I have been lucky enough to win at the Camp Nou and the Bernabéu, it’s a great feeling and the first team squad have also experienced that a lot”.

Sergi Barjuan played in no fewer than eight games at the Camp Nou and won all but one, which was a draw. Those were between 1993/94 and 2000/01. Sergi Barjuan has especially fond memories of “when we won 5-0. It was very special day for me and the club.” That was actually his first ever clásico, and what a way to start!