FC Barcelona will have six young starlets taking part in the upcoming mini-tournament qualifying stage of the Under-19 and Under-17 European Championships.

Sergi Gómez, Marc Muniesa, Sergi Roberto and Rafa Alcįntara have all been selected for the Spain Under-19 squad while Nando Quesada and Gerard Deulofeu have been called up by the Under-17 set-up. The players all travelled to the Ciudad de Fśtbol de Las Rozas in Madrid on Wednesday, October 14, and will set off for the matches this weekend. 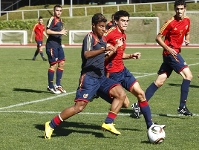 The Under-19 and Under-17 European Championships are divided into three sections with the teams moving from the qualifying round to the elite round and then into the final tournament. Spain’s Under-19 side are set to participate in the qualifying stage, which is effectively a mini-tournament in itself next week.

Placed in Group 11 in the draw Spain will play hosts Lithuania on October 19, then meet Armenia on October 21 before playing Israel on October 24. The top two from each of the 13 groups will make it into the elite round which takes place in Romania next summer.

Spain’s Under-17 also play in a mini-tournament style in Benidorm and will be hoping to reach the next stage with a top-two finish. On October 16 Spain meet Moldova in their first match and then play Finland on October 18 and Russia on October 21. 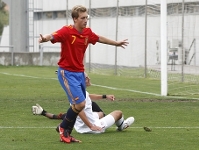 The Blaugrana’s Under-19 starlets Sergi Gómez, Muniesa and Sergi Roberto will miss Barēa B’s games against Gimnąstic de Tarragona and Huesca while Juvenil A players Alcįntara and Gerard Deulofeu and Juvenil B player Nando Quesada will also be absent for crucial league encounters.