The increasing political unrest in Egypt has led to the temporary closure of the two FCB Escolas in the country and the return to Catalonia of their two management teams until the situation returns to normal.

FCB Escola Director Xevi Marcé left Egypt this Saturday after a routine control visit to the two schools in the country and he was accompanied by the two school technical managers, Ivan Pińol and Jordi Gratacós.

Decision made to leave

Xevi Marcé was visiting Egypt to renew the contracts of the two FCB Escolas in the country, but the upheaval in the country forced the Club to decide to stop all activity in the schools until the situation stabilises and Marcé and the two school technical managers have now left the country.

The Egyptian boys attending the schools had trained with relative normalcy until Wednesday, but the growing unrest in the country has made it impossible to continue without putting staff and students at risk.

Xevi Marcé and the two technical directors have been unable to contact their own families in recent days as telephone and internet communications have been severely affected. 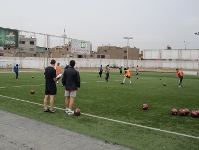