"We are working to bring in a forward"

Eusebio: "We are working to bring in a forward"

The B team's coach said during the press conference after training that the Club is working to bring in an attacker. 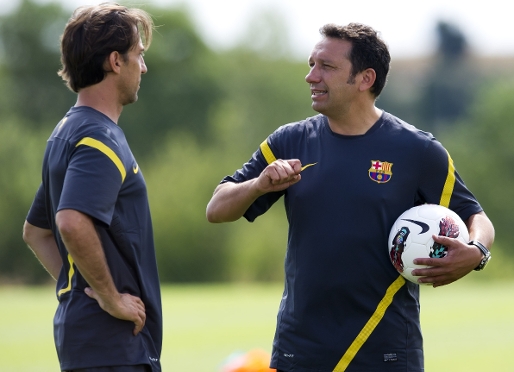 Eusebio Sacristán confirmed on Wednesday that the B team needs a striker to face up to the season with the maximum possible guarantees. "We are looking for someone young who has the possibility in the future to move up to the first team" said Eusebio, who also made it clear that it could be someone "with more experience in the division".

"The primary objective is to educate players"

Eusebio also said that although the main task is to nurture the first team, he has not renounced equalling or bettering the team’s position the end of last season, despite the difficulty. "The goal of the reserve team is very clear, to continue educating players who can make the first team, but that doesn’t mean they we won’t fight for a good position in the league" said an ambitious Eusebio.

One area where more Eusebio has placed most emphasis these days has been tactical, as a he wants to put his "own stamp" on the team to show them how he views football. He also said that he is "very clear what Barça’s philosophy is" and that TorreMirona "is one of the best places to work because of the tranquility that it breathes".

On Thursday the reserve team players will have a day off, but the next day, Friday, they’ll play their first preseason game against Escala, with kick-off at 19.00.