The Barça B team had a training session on Wednesday where tactics were worked on more than the physical side. Eusebio was very insistant on how to overcome pressure by playing the ball out of defence. 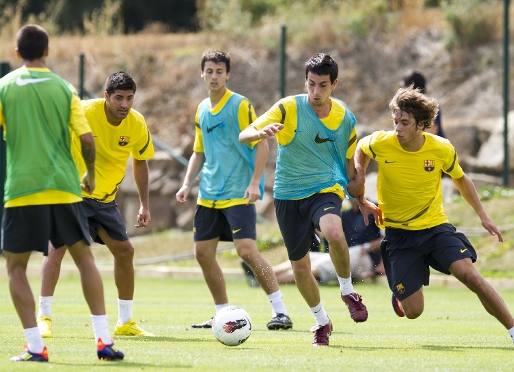 More info
On time, Eusebio Sacristan’s players turned up at the training pitch in TorreMirona (Navata, Girona) to begin their second day of training. At 9.30 the reserve team players started the session which was open to the media.

The session dealt mainly with tactics, as Eusebio wanted to work on how to attack and break down a defence of up to 6 players. Then, to finish the session, they played a few games in midfield to practice the concepts learned on the pitch.

Without a few International players

It’s worth remembering that Martin Montoya, Ruben Mińo, Jonathan Dos Santos, and Javier Espinosa are not with the B team yet, for different reasons. The first two have five days off for having played in the Under-21 European Championships, Dos Santos for having been preparing to play in the Copa America for Mexico, and Espinosa is recovering from an injury in Barcelona.

In addition, Sergi Gomez, Rafa Alcántara and Gerard Deulofeu are in Las Rozas (Madrid) preparing for the European Under-19 Championships in Rumania. This afternoon, starting at 19.00, the day’s second training session will take place.