Barça B beat Alcorcón 1-3 with goals from Rochina, Carmona and Cristian Tello at a ground where no other team had yet managed to take a point.

This was Barça B’s second away win and coming after the defeat to Huesca last week it will give a much needed boost to the team. After a good first half performance, Luis Enrique’s team went on to round it off with two late second half goals to take the three points and move to fourth in the table on 19 points. 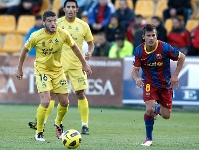 Barça B imposed their possession football from the start and were soon creating chances, with Nolito hitting the woodwork direct from a corner on seven minutes. With a front three of Nolito, Rochina and Benja, the chances continued and midfielder Edu Oriol tested Manu before Nolito hit the post on the half hour .

Hosts make their own chances

Alcorcon were getting their opportunities too and Borja could have done better when he fired over with Masip beaten, before testing the keeper again with a rasping shot that the debut making keeper did well to tip over. 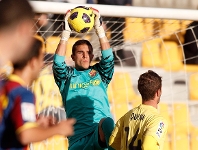 Just when the hosts looked as if they might take control though, Edu Oriol sent Nolito away down the wing and his cross was met by Rochina to put Barça one up. The lead lasted just five minutes as the league’s leading scorer Quini brought Alcorcon back into the match with a 42nd minute equaliser.

After the break, Alcorcon came out the faster and Borja forced Masip into another fine save at the near post as the hosts successfully strangled Barça’s patient build up from the back. But Luis Enrique’s team held firm in defence and Nolito and then Sergio Roberto came close, with the latter seeing his shot hit the woodwork. Alcorcon themselves could have gone ahead as Jeremy bore down on Masip, but Montoya flew in with a great tackle. The game was now opening up with neither side looking wholly safe.

On 83 minutes though, it was Barça who took the lead when Benji and just minutes later, Sergio Roberto could have finished the game off, but he missed his chance and it was left to Tello, two minutes from time, to put a way a good through ball and make it three. In injury time, Alcorcon saw themselves reduced to 10 men as their keeper Manu was shown a straight red for an altercation with Montoya. 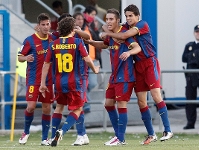