“This defeat will help us concentrate”

“This defeat will help us concentrate”

Barça boss Luis Enrique is aware that the defeat against Huesca must serve as a warning sign for his team, but insisted: “there is no relaxation in the squad”.

Speaking to the media after his team’s first home defeat of the season, Luis Enrique commented: “here in the second division you can go in three weeks from being in heaven to worrying about your position. This will serve as an alarm call for us and help us concentrate- the difference between winning and losing is very fine and we have to be fully focussed”. 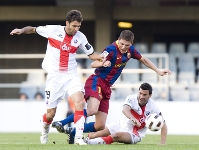 As to the game itself, Luis Enrique reckoned: “it was a game which we found hard right from the start. We tried to ensure that there was no relaxation, but it wasn’t easy as they closed down really well. We played at a slower pace than the game needed. I think the game should have been goalless, as neither team created any really clear cut chances. We made a couple of defensive mistakes and Galivan did well to get their goal. They took advantage of their chance and took the three points”. 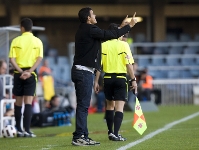 Luis Enrique insisted: “I don’t think they were better, but neither were we. We haven’t relaxed and there won’t be any relaxation, but if we lose our focus, we’ll start to have problems”. Luis Enrique also commented on the kick off time, which coincided with the first team’s game against Zaragoza: “the club are trying to change things so it doesn’t happen and I hope the TV companies take note”. 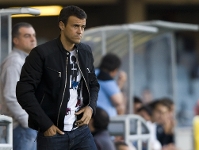 Centre halves Andreu Fontŕs and Marc Bartra only played 45 minutes each against Huesca, with Bartra coming on for Fontŕs At half time and Luis Enrique explained: “the first team must come first and both of them could be part of the team that plays Ceuta on Tuesday. If the first team needs something, we’ll give it and we are very happy to do that, as that is our objective”.