Sparkle absent at the Mini Estadi (0-1)

Sparkle absent at the Mini Estadi (0-1)

Barça B suffered their first home defeat on Saturday night when Huesca beat them 0-1 after a goal from Gilvan in a game in which Luis Enrique’s team showed a lack of sparkle up front.

Huesca came in dire need of points and set out their stall to frustrate Barça B and take full advantage of whatever chances came their way, something they did to perfection with Gilvan pouncing on a defensive slip up from the hosts to inflict the first defeat in five games at the Mini Estadi this season. 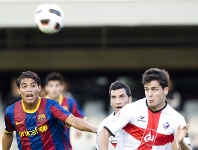 The goalscorer Gilvan gave plenty of warning of his danger, coming close in the very first minute of the game and Huesca were clearly in the game for the three points. Cristian Tello had a chance soon after for the hosts.

Huesca were pressing Barça high up the pitch and making it tough for Barça to bring the ball out from the back and Luis Enrique’s youngsters were unable to control the pace of the game and play their usual classy football from midfield. The visitors weren’t just out to destroy though and they also looked to threaten Mińo’s goal. 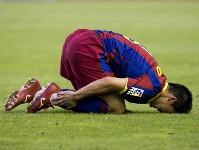 Barça’s best chances fell to their two leading scorers Nolito and Soriano, with both having a chance on 6 minutes that was eventually cleared off the line and Nolito again failing to put away a counter led by Ilie on 13 minutes. Ilie himself tried his luck with a shot from the edge of the box five minutes later and Carmona then headed wide on the half hour.

Although the team still looked uncomfortable at times –particularly in the air when Huesca attacked, slowly but surely they began to wrench control and begin to play with more confidence in midfield, whilst still lacking sharpness up front and in the last pass.
.
Goal against the run of play 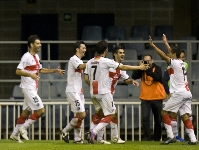 Huesca started the second half as they had the first with a good chance for Camacho which Bartra, who’d come on for the injured Fontŕs at the break, needed to be sharp to cut out. Barça were dominating though, with Soriano and Nolito again getting chances, and Huesca’s goal was against the run of play as Gilvan pounced on a defensive muddle to fire home from a narrow near post angle past Mińo on 73 minutes.

Huesca tried to waste time after the goal as the clock ticked down, but even so Barça B had their chances before the end through Dos Santos and Nolito, though in the end it wasn’t to be and Luis Enrique saw his team lose their first game at home this season. 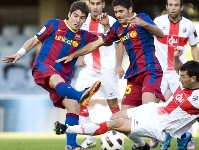