Barça B boss Luis Enrique reckoned that his team’s 1-1 draw against Nastic was a fair result - “Nastic played well and they deserved the point”.

This was the first point on the road since the opening league game for Luis Enrique’s team and the boss reckoned: “after what I saw out there, it’s a good result – well a fair result rather than a good one. Both teams looked fitter in the first half and there were chances for them and us, whist after the break I thought we were more incisive and created more danger. We just didn’t finish them off”.

Nastic are third from bottom and have won just one game so far this season, but Luis Enrique was full of praise for their attitude: “even though they conceded the early goal, they didn’t fall apart, which is what often happens to teams in their position. They played very well and they deserved the point. They put in a good performance and their position in the table doesn’t do them justice on this showing”.

Home or away same style 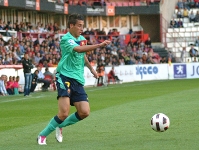 Although this was only the second time they’d picked up points on the road, in contrast to their 100% home record. Luis Enrique insisted: “we try and get across to the players that it doesn’t matter if they are playing away or at home. Nothing changes, just the fans are behind you or get on your case, just the peripheral elements – everything else is the same and we have the same idea about football wherever we play, we don’t change that”. 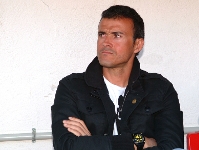 Barça B went into the game in Tarragona without seven players – the injured Abraham, Oier and Jonathan Soriano, internationals Sergi Gómez, Muniesa and Sergi Roberto and Thiago who was with the first team. Luis Enrique refused to use that as an excuse though, explaining: “that’s going to happen all season. This is not a typical B team and we knew that from the start of the season and I’m not surprised by it. We’ll not use it as an excuse, it’s something normal. The players who are available and train are the ones we’ll use”.