Luis Enrique’s Barcelona B picked up their fourth away point in the Catalan derby thanks to an excellent first half performance and a goal from Nolito. 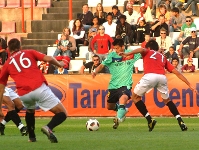 Nolito had already come close in the very first minute, but was thwarted by home keeper Rubén Pérez. Álex Ortiz did come close on the counter attacks for Nastic, Barça B dominated the early minutes, and it was thanks to Nolito, with a terrific run from the left, followed by a low, hard drive that put Barça B ahead with a lot of football still to be played. 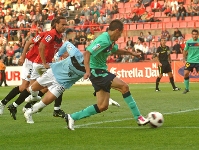 The goal brought new life to Nŕstic and Morán hit the post within minutes of the goal. Shortly after Álex Cruz was brought down in the area by Fontŕs, and the home side were awarded a penalty. But luck was on Barça’s side, as Gerardo Noriega’s spot kick struck the post. The good fortune failed to reappear, however, in the 38th minute, when immediately after Nolito and Tello has seen clear chances to make it 2-0 frustrated, Nŕstic pulled level thanks to a powerful Eloy drive that proved too much for Rubén Mińo.

After the restart, Nŕstic started gaining ground in a game that deteriorated in terms of footballing quality. It was not until the 70th minute that either side conjured up a clear-cut chance, The Barça coach opted to shake things up a little and brought on Víctor Vázquez and Rochina in place of Carmona and Saúl, and that seems to provide the oxygen the visitors needed. 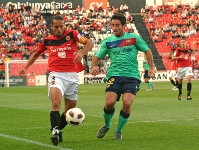 Montoya busied himself with searching crosses from the wing, but rarely found a target, and as the minutes ground by, it looked less and less likely that the winning goal was going to materialise. Nolito did have a shot with eight minutes to go, but it wasn’t enough to surprise Rubén Pérez and that was the last of the action. The 1-1 draw equates to the reserve teams first away point since winning on the opening day at Celta Vigo and leaves Luis Enrique’s side with 16 points and a comfortable place in the top half of the table. 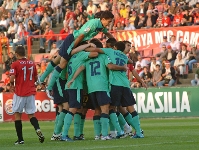