Luis Enrique only wants one version

Luis Enrique only wants one version

Barça B coach Luis Enrique was highly satisfied with the win against Tenerife at the Miniestadi and said it is important to be strong home and away.

“It was a very complete game” he said after the 3-1 win. “We played with the ambition you need to do damage to Tenerife. We need to compensate our attacking and defending strengths and we did that perfectly in the first half … but there were 20 minutes when we were in Tenerife’s hands”. 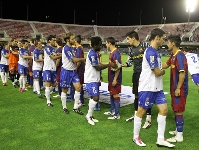 Barça B have 12 points out of 12 at home. “To have a good season we need consistency at home and so far we have done that with marvellous support at the Miniestadi.” But bad results in Cartagena and Cordoba. Suggest away problems. “Anyone can beat us and we can beat anyone. We will be working on there only being one version, and being stronger away from home”. 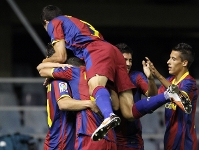 Asked about the many missing players against Tenerife (Mińo, Fontŕs and Thiago with U-21, and Muniesa suspended), Luis Enrique said “I have a big squad, to think about the first team mainly … We have designed the season to be able to deal with these things … Confidence is high and I just want my players to make the most of their chances”. Abraham Minero had done just that in the last four games, but will now be out for a month with an arm injury, which for Luis Enrique was the most negative point of the day.

Luis Enrique described goalscorer Nolito as “a player who has improved a lot since arriving two seasons ago. Nolito was great last season, he has unique ambition and is on top form. He can live from football for a lot of years”. 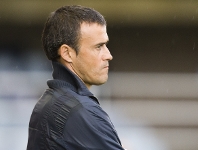 These are some of the players’ comments after the match.

Carlos Carmona: “I’m happy with the goal and the three points. We’re playing well at home, the ground is spectacular and we have to carry on like that”.

Oriol Romeu: “The team was serious at the back, which is important in a game like this. We’re playing well at home but we have to improve away”.

Oier Olazábal: “We got a bit nervous when they scored, but we relaxed when it went 3-1. We’re very pleased”.

Sergi Gómez: “We knew it wouldn’t be easy, they’re good on the counter but we started well. The goal against us caused some worry because they started improving, so the third goal was needed to end the game”.

Sergi Roberto: “I happy because we got the three points we needed. The win means we go up to fourth. The fans help us a lot in these home matches”.