Barça B extended their great home start to the season, chalking up their fourth win at the Mini Estadi with a 3-1 win over Tenerife, thanks to strikes from Jonathan Soriano, Nolito and Carmona.

With seven games played, Luis Enrique’s team have now won five and proved unbeatable at home. The win against Tenerife came after a very serious performance, particularly in the first half that pleased the nearly 4,000 fans who came along to watch late on Sunday evening. The team played some good pacey football, with their trademark passing and entertaining attacking style. 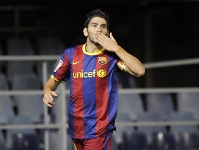 Jonathan Soriano opened the scoring on 9 minutes after a good start by Luis Enrique’s young charges, who seemed determined to put last week’s defeat in Cordoba behind them. Martín Montoya, who was tireless throughout the game, intercepted a Tenerife attack and put Nolito in to cross for Soriano to meet perfectly and make it 1-0.

Almost immediately after, Sergi Roberto nearly made it two, but his shot from outside the box was just turned round by Tenerife keeper Sergio Aragoneses for a corner. Although Barça looked sharp in defence, constantly cutting out Tenerife’s attacking attempts, the Islanders, who were many people’s tip for promotion at the start of the campaign, but now find themselves bottom, began to surge forward and Olazábal was forced into a good stop to keep out the dangerous looking Nino. 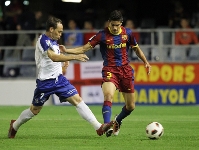 Barça again upped the pace and were looking increasingly impressive both at the back and in attack and the second goal wasn’t long in coming. On 39 minutes, Cristian Tello, who was making his debut, crossed a ball from the by-line for Nolito to put away and double the lead.

Tenerife showed that they were not giving up when Mikel Alonso pulled a goal back at the start of the second half with a deflected shot that gave Olazábal no chance and at 2-1 the visitors began to put the pressure on with a number of chances from dead ball situations that Olazábal did well to keep out. 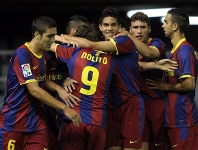 Luis Enrique brought on Víctor Vázquez to bring some order to the midfield and just when things were looking most difficult for the team Carmona met a left wing cross from Abraham to seal the win on 68 minutes.

No rest for Olazábal

Tenerife refused to lie down and although Barça were now very much in control again, Olazábal had to be on his guard as the visitors tried to get back into the game. Barça played the last few minutes with ten men after Abraham had to come off with a back injury.

The win leaves Barça in fourth spot with 15 points and the joint best home record in the division – four wins from four, eight goals scored and just two conceded. 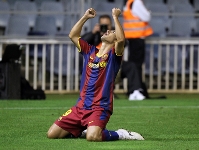