Luis Enrique: “not an ideal game”

Luis Enrique: “not an ideal game”

Barça B boss Luis Enrique recognised the difficulties his team had gone through in the game against Cordoba, but insisted that his team’s “best football” is capable of beating anyone in the division.

The defeat against Cordoba (2-0) followed two successive wins for the B team and was also the team’s second away defeat so far this season and Luis Enrique reckoned: “we knew Cordoba were strong on set pieces and planned moves. The first goal came after a foul. They pressured us well high up the pitch and they did a good job. We managed to build a few things, but they made it difficult”. 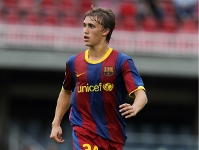 With Marc Muniesa sent off for a second bookable offence on 42 minutes, Luis Enrique’s team went through more than half the game with just 10 men. The B team boss reckons the sending off was a sign of his player’s “innocence – if you already have one yellow then you can’t go to ground in a tackle. However, we went out for the second half determined to do something, but their second goal set us back badly”.

Luis Enrique added: “we saw a bit of what Barça B are about, but not the whole thing. We tried to build from the back and play our passing game even though the pitch wasn’t in great shape, but Cordoba’s defence made it hard for us. It wasn’t an ideal game for us”. 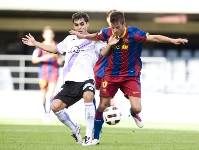 Despite the defeat, Luis Enrique maintains his confidence in the team: “it’s hard to win away from home for any team. I just want us to try and play our best football, because then we can beat anybody. But in this division you have to get all the little things right and if you don’t, you can also lose against anybody. We have to be competitive not just when we can play from the back, but also when we have to take a more direct approach”. 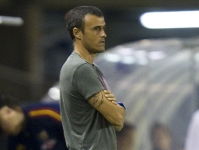