All seven Barça B players in Luis Milla’s Spanish Under -19 squad featured in the 2-1 win over Portugal on Wednesday afternoon, which following the defeat of Croatia last Sunday virtually ensures Spain a place in the semi finals.

Keeper Ŕlex Sánchez, defenders Montoya, Bartra and Planas and midfielders Romeu and Thiago all started the game and striker Rochina came on in the second half.

Spain dominated from the off and with a style of play familiar to observers of the Barça B team and indeed of the full Spanish outfit, they held onto possession and probed for openings in the Portuguese defence. Ex- Barça striker Pacheco, now at Liverpool, opened the scoring on 12 minutes and Thiago came close to making it two soon after. Alex was having little to do in goal as his Barça teammates in defence repelled any timid attacks from the Portuguese.

Chances kept coming Spain’s way in the second half , but their failure to convert possession into goals was punished by Portugal on 78 minutes when Pinto hit home a speculative shot from the edge of the box to make it 1-1. Milla now threw on Rochina and the Bilbao star Munian as Spain pressed for the winner, but it was Pacheco who scored it, grabbing his second with two minutes to go to virtually ensure top spot in the group for Spain. 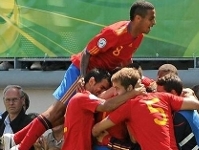 Thiago opened the scoring for Spain in the tournament, with a second half equaliser in Sunday’s opener against Croatia. Rodrigo made it 2-1 as Milla’s team – again with all seven Barça B players featuring – made a great start to the group. The final group game is on Saturday against Italy.