Barēa B to start campaign in Vigo

Barēa B to start campaign in Vigo

Luis Enrique’s Barēa B team will make their Segona A debut away to Celta Vigo at the end of August, with Xerez the first visitors to the Mini Estadi and a trip to Rayo Vallecano the final game of the campaign.

Barēa B’s first test will be against Celta Vigo, a team who just eight seasons ago were battling it out in the last 16 of the Champions League. The Galicians are managed by Barcelona born Paco Herrera, who was Rafa Benitez’s assistant at Liverpool for two years and took over at Balaidos from Eusebio Sacristįn. 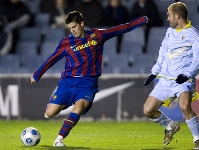 After their tough start against Celta, they face a similarly hard game against Xerez, who were relegated from the top flight at the end of last season, despite a brilliant second half to the campaign under manager Gorosito. Two more tricky games follow soon after, with Juan Carlos Unzué’s Numancia in week five and Tenerife in week seven. 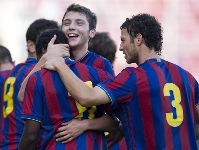 On October 17th the team travel to Tarragona to face Nastic and on January 9th Girona visit the Mini Estadi. One of the most looked forward to games is probably going to be the trip to Seville to play Betis on November 20th, with return game set for April 24th

The 42-game campaign ends on June 5th when the team play away at Rayo, with the game against Salamanca the week before wrapping up the season at the Mini Estadi. 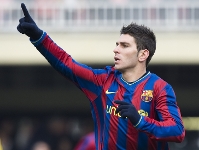 There’ll only be five weekends on which Barca B home games coincide with the first team also playing at the Stadium to give the fans the chance to see both teams on a single day: