All 17 of the Barca B players who are not involved in the European under 19 Tournament with the Spanish team have been called up to join the first team squad when training starts on Monday.

With most of his international players still on holiday after their World Cup exploits, Guardiola has decided to bring in all the players available from the reserves.

Below are brief profiles of the players Guardiola has called up:

Oier Olazábal. 20 years old. Keeper. Guardiola knows him well after managing him in the 2007/08 season when he was in charge of Barca B. Safe and dominant, the Basque keeper, who arrived at the club three years ago from Real Union Irun is especially strong in the air.

Rubén Mińo. 21 years old. Keeper. The local boy is agile, fast and very strong in the air, as well as being a specialist penalty stopper. After joining as a boy from Cornellŕ, he has come up through Barca’s youth teams.

Jordi Masip: 21 years old. Keeper. Another local lad, Jordi is very agile and has excellent reflexes. He joined the club from Mercantil in Sabadell in 2004 and played on loan at al Vilajuďga in the 2008/09 season. 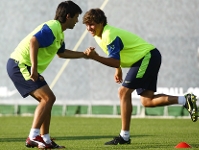 Albert Dalmau. 18 years old. Right back. Physically strong, Albert can get up and down the pitch throughout a game and has an excellent cross. He frequently figured as a right winger last season with the Youth team.

Sergi Gómez. 17 years old. Centre half. The Catalan was a real revelation at the end of last season. His strong aerial presence and aggressive defending are matched by good distribution.

Armando Lozano. 25 years old. Centre half. The Andaluz centre half joined from Llevant last season to bring experience to the back line. Classic defender – strong, committed a good man to man marker. 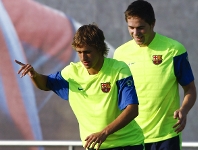 Marc Muniesa. 18 years old. Centre half. Muniesa is a versatile defender whose natural position is as a left sided centre half, but who has also played at left and right back under Luis Enrique. His anticipation, reading of the game and distribution are his strong points.

Andreu Fontŕs. 19 years old. Centre half. Since switching from midfield a couple of seasons ago, Andreu has become a key member of the Barca B defensive unit, which he leads with great positioning and a sweet left foot.

Ilie Sánchez. 19 years old. Central midfielder. After coming through the club’s youth system, he was farmed out to Cornellŕ where he matured whilst maintaining the typical aspects of a Barca trained player. Keeps possession well with intelligent movement and has learned to fit in at full back, as well as a wide midfielder. 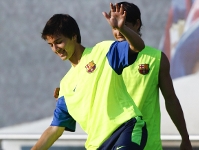 Martí Riverola. 19 years old. Attacking midfielder. Joined the FCB Escola when he was just 6 years old and progressed through the youth teams as a prodigious goalscorer, before settling in as an attacking midfielder who loves to get amongst the goals.

Sergi Roberto. 18 years old. Attacking midfielder. Caught Luis Enrique’s eye at the start of last season and is the prototype of a modern midfielder: good in the air and with both feet, strong and able to get forward and join the attack. 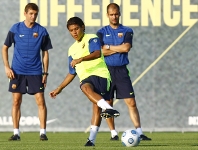 Jonathan dos Santos. 20 years old. Attacking midfielder. Joined the club as a child. The Mexican youngster is creative and has improved the physical side of his game considerably. His long range shots and free kicks make him especially useful for the team.

Edu Oriol.23 years old. Right winger. Came from Sant Andreu and brought depth and incisiveness. Right footed, but able to switch to the left, Edu is a winger who constantly looks to take his man on, but is always willing to track back when needed.

Víctor Vázquez. 23 years old. Forward. This is Victor’s fifth season with Barca B after coming up through the ranks alongside Cesc and Pique. He can play in a variety of forward roles, but is most dangerous playing in the hole behind the strikers.

Benjamín Martínez,‘Benja’. 22 years old. Centre forward. The Catalan is a master at getting behind defences and is equally comfortable down the centre or drifting out wide. Signed from Europa two seasons ago, he was out on loan at Reus before Luis Enrique decided to bring him back.

Jonathan Soriano. 24 years old. Centre forward. Key in last year’s successful promotion campaign, Soriano was the team’s leading scorer and an important figure in the squad. Skilful and sharp, he has refound his footballing ability since joining Barca.

Manuel Agudo, ‘Nolito’. 23 years old. Winger. The Andaluz winger is highly skilled and reads the game well. He played as a second striker with his previous club Ejica, but has successfully moved out onto the wing with Barca B. A right footer, he plays on the left and cuts inside with devastating results. 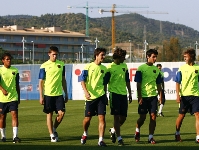 Keeper Ŕlex Sánchez, defenders Montoya, Bartra and Planas, midfielders Romeu and Thiago and the striker Rochina are the only Barca B players not called up, as the seven players are with Luis Milla’s Spanish under-19 squad for the European Championships.