Party incomplete in the Mini Stadi (0-3)

Party incomplete in the Mini Stadi (0-3)

The Barça B team defeat against Betis broke the run of nine games unbeaten by the reserve team. Two goals before half-time for the visitors sealed the win for the leaders in a stadium that registered the largest crowd of the season. 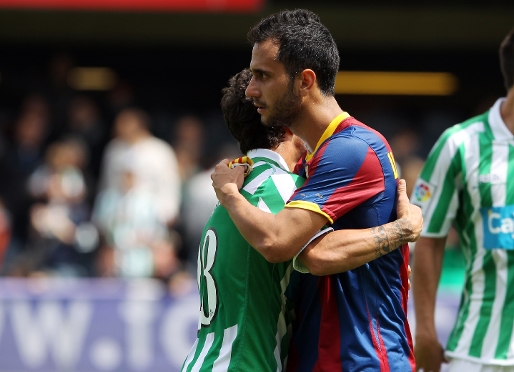 Referee: Pino Zamorano.
It was announced as a first division match because first and fourth placed teams in the Second Division were facing each other, and the game lived up to expectations. The more than 11,000 spectators in the ground witnessed fine football from both Barça B and Betis, as well as the enormous attacking potential of the Betis side. 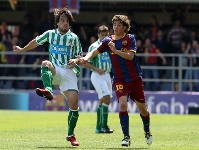 Barça B started strongly and ambitiously, putting Betis under intense pressure. After only 2 minutes, Nolito claimed a penalty that could have resulted in the sending off of the Betis defender. Betis gradually got into the game, and created chances for Rubén Castro (min 19) and Pereira (min 24). The best chance for Barça B fell to leading scorer Jonathan Soriano with a cross shot that went just wide (min 28).

The game was wide open. The two teams, with a reputation of having similar styles, battled to gain control of the game, always looking to play the ball on the floor. Juanma, for Betis, changed the game. Two crosses by the Betis right winger ended up at the feet of Castro and Jorge Molina, who both put the ball past Oier, just before the break.

Iriney dashed the Barça B hopes

After the break, Luis Enrique sent on Tello for Ilie looking to shake things up. The perceived Barça reaction came from a free-kick from Soriano (min 54), that hit the post, but shortly after that, Iriney tied up the game with a powerful well-placed shot from outside the box. For Betis, well organised, and clearly dominant in this period, 3 vital points were secured, that helped them to regain first place in the League, and they didn’t allow themselves to be surprised by Barça B’s final push, thus ending Barça’s unbeaten record.